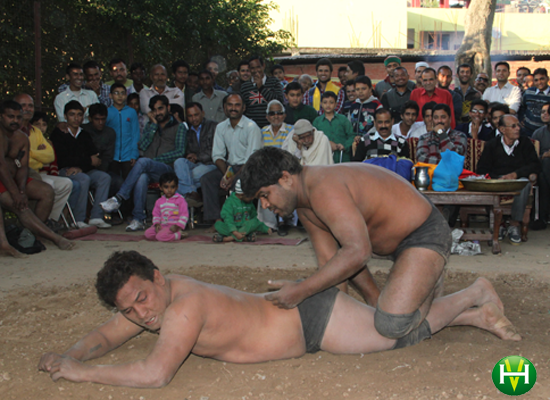 Nahan is famous for the local traditions and recently I got a chance to watch the 43rd Annual Hajrat Lakhdata Peer Sahib Dangal which took place at the dangal ground adjacent to the Lakhdata Peer shirne in Puccka Tank Nahan. There were 50 participants from Haryana, Punjab, Himachal Pradesh, UP and Delhi, who took part in the famous dangal and the final fight was between Kashmiri from Himachal Police team and Sukhwinder Singh who came from Merrut.

Although the finale fight was a draw because both the wrestlers were totally awesome. After the end of the final fight, there was a rumali fight which is an open challenge. It was between Kashmiri and Thapa from Nepal. The Chief Guest, Sh. Amarjit Singh Parmar was thrilled to see the performance.

I was amazed to see the wrestling as it was my first time to watch such an amazing game. I just loved the way the wrestlers were welcomed with drums and the drummers Moin Ahmed, Gulshan Ahmed, Bobby bhai ji did a great job. The welcome ceremony was done by Gafur Ahmed uncle who is a common face at the Lakhdata Peer Darhgah of Nahan.

After the dangal I had a few words with Gafur uncle and he told me that there is an amazing past attached to the famous dangal of Nahan. The dangal takes place a day before the famous Renuka Ji fair. The participants of the Renukaji fair dangal used to visit Nahan a day before the fair and they used to practice in the same place during Gafur uncle’s grandfather, Mohammad Baksh’s days. Baksh was a wrestling enthusiast and after his death, in his memory, each year the Hajrat Lakhdata Peer Dangal of Nahan takes place.

Having such tradition each year in my own town was so irresistible that I couldn’t stop myself from being a part of the crowd watching the game of strength and spirit. Such games are an example of brotherhood and passing it on the to the next generation is just too amazing as it will help in preserving the culture and tradition.