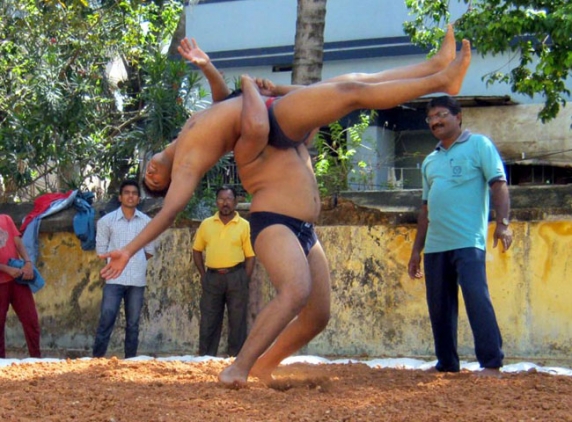 Traditional wrestling is still very much part of Kerala

They push and pull and wrestle in the mud, trying to nail down their opponents. They are the custodians of a once popular sport, ghatta gusthi, or Indian-style wrestling.

Despite, cricket, football and other popular sports luring a majority of Kerala’s traditional wrestlers, youngsters still find the sport appealing and keeping this in mind, Kochi is planning to host the 46th state championship.

Cochin Gymnasium, a 66-year-old akhara at Mattanchery is readying itself for the competition. “Last year nearly 180 wrestlers, including teenagers participated in the state championship and apart from Ernakulam, entries are pouring in from Kottayam, Thiruvanathapuram, Thrisur, Kozhikode and Kannur,” said M.M. Salim, state secretary of the Indian-style Wrestling Association.

Unlike, Olympic events like Greco-Roman and freestyle, ghatta gusthi is played in mud and used to enjoy massive popularity much before the other games gained prominence, Salim recalled.

“Though, the game has suffered over the years, young boys still come into the sport mainly because winners are given grace marks in their Board examinations,” Salim — who also trains young wrestlers at Cochin Gymnasium — said.

Vyppin resident K.V. Vipin Das was crowned Kerala Kesari (best wrestler) last year. He is 26 and says he was attracted to the sport when he was just eight.

“The game is masculine and youngsters take it up mainly because there are grace marks for the PSC examination,” said Vipin, who practices on the beach.