Anup Satphale, Expressindia
Every profession has different nutritional requirements. Here's taking a look into the diet charts of different professionals and the dos and don'ts that keep them fighting fit
Wrestling is a game of power and tactics. In all sports , including wrestling, food intake along with regular exercise play a major role in keeping the sportsperson healthy and fit enough to pursue his game. Twenty-year-old wrestler Ranjeet Nalwaade plays in the under 66 kg group and has also made a mark in several National and Asian games. He has several prizes to his credit. 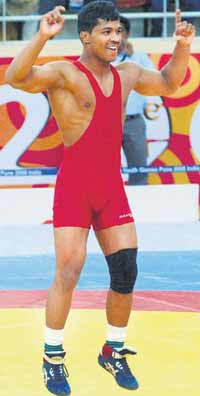 Ranjeet has a fixed schedule that keeps him fit and fine for his wrestling matches. His day begins at 4.45 am and he's up and about till 11 pm. The young wrestler says, “After I wake up, I got for a run. Later, at the akhada, I do basic exercises. This is then followed by badam and thandai with a breakfast of pohe, upeet and so on.” After this filling early morning meal, he eats lunch early at 11 am. “For lunch, I eat chapati, dal-rice, any vegetable and some times a non-vegetarian dish of chicken or mutton, which gives my body the protein it needs.”
Along with a good diet, an important area is relaxation. This gives the body renewed power to work again. Ranjeet explains, “After lunch, I relax for two hours. This helps the body maintain its stability. At 3 pm, it's time to practice. This session always begins with a warm-up procedure after which wrestling techniques are practiced. I also do normal as well as stretching exercises.” This session usually goes on for three or four hours, after which he has thandai to cool the body and let the heat settle down. “After an hour, I sit for dinner. I usually have rice and a non-vegetarian dish. After two hours, I drink milk and eat fruits like apples and bananas. Bananas are a must as they help increase weight.”
Ranjeet follows certain food restrictions as well. He avoids fatty foods. “I eat two to four eggs a day. I stick to the egg whites and avoid eating the yolk, as it is high in fat,” he says. Ranjeet does wrestling on the mat and soil, but, “I like mat wrestling as it has some more speed than soil wrestling,” he says. Certain sports have some restrictions at the time of matches, but wrestlers have to maintain their weight so they need to eat very well and follow their diet perfectly to the T. Ranjeet eats less ghee but drinks a lot of fruit juices. “Most of the time I drink citrus juice,” he says.