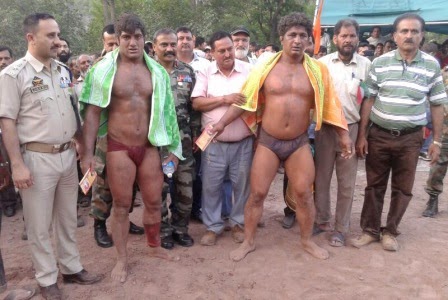 Ramban, Apr 29: In connection with Bisakhi celebrations, a Dangal (wrestling competition) was held at Ramlila ground Maitra here today.
The competition was co-organized by the Maitra Dangal Committee and 11 sector Rashtrya Rifles in which local wrestlers and the wrestlers from various parts of the state took part.
Brigadier Bupesh Kumar, SP Javeed Ahmed Matto and president Maitra Dangal Committee Gopal Krishan Raina were present on the occasion. Cash prizes were awarded to both winners and runners-up of the wrestling competition.
More than Fifty wrestlers took part in the wrestling competition which was witnessed by thousands of people from the town and far flung areas of the district.
At the prize distribution functions, dignitaries emphasized the need for inculcating the spirit of sportsmanship and its role in national character building.
Citing the need and role of sports and games, chief gust Brigadier 11 sector RR and other speakers demanded that Ramban being a peaceful area and having old age communal harmony between various communities living in the district, Dangal should be organised in the town every year in the month of Baisakh. He said the event has become a cementing force between the communities of the area and provides encouragement to local sportspersons. It also keeps them away from bad habits like durgs etc, he said.
The winner of the final bout, Zakir Hussain from Jammu was awarded rupees six thousand and other gifts while as the runner up, Nisar of Bhalessa was given and cash prize of rupees four thousand by the chief gust.
The prizes to the winners were given away by the Commander,11 Sector RR, Brigadier Bubesh Kumar Sewa Medal.