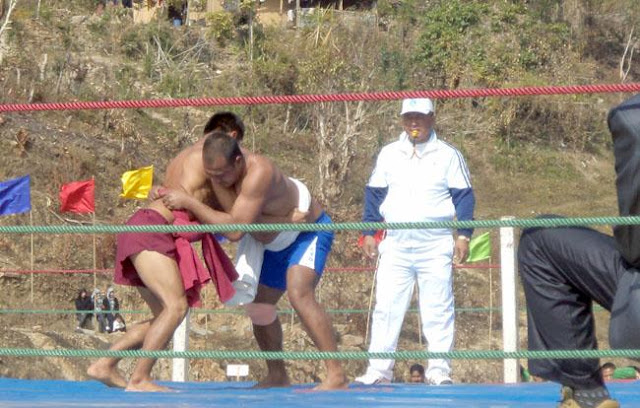 Declaring the wrestling meet open as chief guest, Minister for Higher Education and Urban Development, Dr. Shurhozelie Liezietsu said that the DAN government under the leadership of state chief minister, Neiphiu Rio was taking initiative to promote sports and music in the state. He called upon the youths to avail the opportunities.

He said that to be a good sportsperson, one must maintained strict discipline, take exercise regularly to keep fit and healthy to compete in sporting activities.

Talking about the traditional Naga wrestling, he said that no countries in the world expect in few parts of Sumatra and Brunei plays similar to the Tenyimia style of wrestling and called the associations involved in it to promote the game to higher level.

He went on to say that that the Tenyimias maintained a high standard of values in the field of socio- cultural heritage, traditions and even in traditional wrestling in past our fore-fathers fore-father were quite knowledgeable.

The minister also congratulated the NASA ‘C’ team led by Roko Angami for organizing the wrestling meet and wished the players and the meet a success. Upon his arrival he hosted the NASA ‘C’ flag.

In his address Roko Angami, president NASA ‘C’ disclosed that the selected wrestlers from the two-day meet will represent the NASA ‘C’ in the upcoming NASA Wrestling meet, scheduled in February.

Earlier KT Vilie, chairman, Zhadima Village Council welcomed the participants to Zhadima village and informed that 12 villages are taking in the two-day meet.