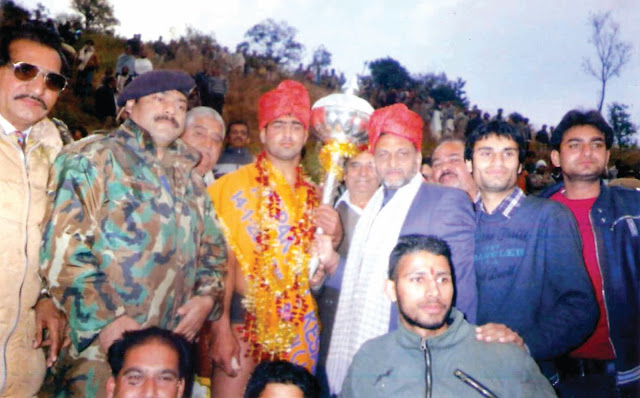 Wrestler Benia of the state police and a resident of Basantgarh in Udhampur district lifted the 112th annual Panthal Kesari Dangal title outplaying Amit of Delhi, in a closely fought contest that lasted for 15 minutes at Panthal in Reasi district today.

The winner of the first bout, Benia, was given a cash prize of Rs 11,000, in addition to traditional silver gurj and patta by chief guest and president of the J&K Indian Style Wrestling Association Shiv Kumar Sharma.

Runners-up Mool Chand got a cash prize of Rs 5,000. Prof Shiv Nirmohi was the guest of honour on the occasion.

Panthal Kesari Dangal is being organised regularly for the last 112 years on Makar Sakranti with the active cooperation of locals from Panthal, Katra, Udhampur, Jammu, Manoon, Bhagata, Kunya, Chak-Bhagta and other areas.

In all, 54 bouts were played in the day-long dangal. In the second main bout, wrestler Sagar of Delhi beat Pura of Pathankot (Punjab). They won cash prizes of Rs 6,000 and Rs 5,000, respectively. The third bout was played between Goga and Billa, which was won by Goga.