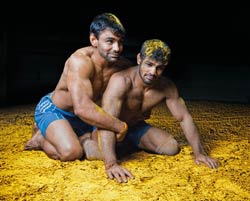 As Sushil faces off his hulking opponent, one can't help but give a little smirk, because their stances resemble clumsy gorillas, pawing away at each other. The smirk doesn't last too long. In one swift move, Sushil evades a leg-grabbing tackle, rolls over and has his opponent faster on his back than you can change expression. He lashes out as fast as a snake and is slippier than an eel, proving how he's managed to reach the top.

He is watched over proudly by his mentor 'Mahabali' Satpal Singh, a gold medallist in the 1982 Asian Games and president of School Games Federation of India and Ramphal Mann, winner of last year's Dronacharya award.
Read More Here