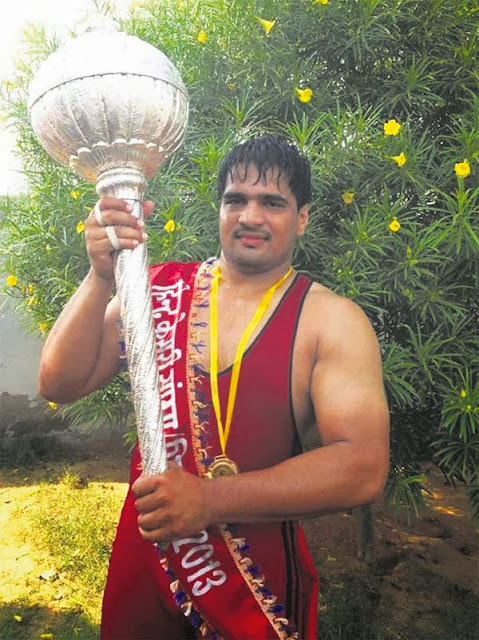 Pune: Wrestler Amol Barate brought laurels to the city after winning the prestigious Hind Kesari title on Tuesday.
Barate is on cloud nine, and why shouldn't he be. “I'm happy that I won the title and made my city proud. The whole credit goes to my brother,” said Barate.

Barate beat Sonu of Air Force by 6-2 in ‘Mat Wrestling’ at Bhivani, Haryana, and was crowned with the title, Hind Kesari.

Barate has been wrestling since he was 15 years old and now wrestling is in his veins.
“This game has given me everything. It has made me a strong person. I cannot imagine my life without wrestling,” said Barate.

The Hind Kesari title means everything for the city wrestler as he thinks winning this title has put Pune on the national map of wrestling.

Diet is important
According to Barate, a proper food regime is a pedigree for a successful career in this game. “A proper nutritious diet for wrestler will do wonders for him/her. It will not only keep the wrestler fit but also give him/her the mental stamina,” said Barate.

Barate's diet consists of five glasses of juice, dozens of eggs and proper meals in a day. He makes sure to practice for six hours everyday - three hours in the morning, which includes running, climbing up Parvati hills and yoga and in the evening, he does professional training of the game.

For Barate, Olympic medallist Sushil Kumar is the one who got India on the global map of wrestling.

True fighter
Wrestling is always on Barate's mind. His love for the game is immense and he would do anything to promote wrestling. Barate suffered a shoulder injury two years ago. “That was a bad patch of my life. After the injury, I took a year's gap. Later, I rigorously practiced. And here I'm with the Hind Kesari title.”

About Hind Kesari
Affiliated to the All India Amateur Wrestling Federation (AIAWF), Hind Kesari, an Indian-style wrestling championship, was established in 1958. The first Hind Kesari winner was Ramchandra Babu. For the first time ever in 2011, woman competitors were allowed in the event.
Some of the previous winners: Rohit Patel, Rajiv Tomar, Maruti Mane, Nana Yadav, Ramchandra Babu.