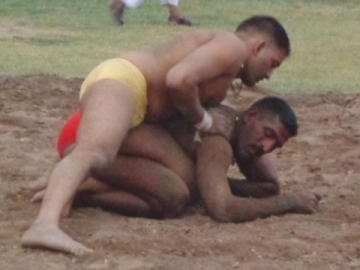 LAHORE – Mustafa pehalwan beat Sarwar Sayin pehalwan to lift Fakhr-e-Lahore Dangal title here at the jam-packed Iqbal Park Wrestling Stadium on Sunday.
Mustafa pehalwan proved too hot for Sarwar Sayin pehalwan and after 10 minutes, he defeated his opponent and won the title.
In other competitions of the event, Asmat pehalwan defeated Arshad pehalwan, Aqib pehalwan beat Jhara pehalwan and Mama pehalwan outclassed Aamir pehalwan. The most interesting match of the event was played between Chiri pehalwan and Chamkeela pehalwan which ended in a draw while the matches between Kala Shahporiya pehalwan and Azhar pehalwan and Nomi pehalwan and Nadir pehalwan also ended in draw.
MNA Pervaiz Malik was the chief guest on the occasion along with MPA Khawaja Salman Rafiq who gave away title belt to the winner.
Speaking at the occasion, Pervaiz Malik said: “Mohsin Arshad has great contributions in promoting culturally rich game across the province which is really appreciable. He has been fulfilling his duties in a befitting way. The presence of big crowd to witness the title matches is a proof of the event’s success.”