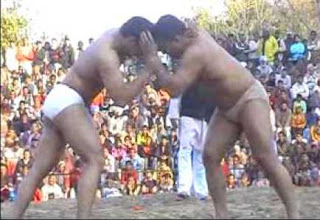 Lahore—Shahid Pehalwan will face off with Usman Pehalwan in the main bout of Sher-e-Punjab Dangal here on June 6 at Punjab stadium.
This was stated by Secretary Sport Punjab, Saeed Ahmad Nawaz at a news conference here on Tuesday. Also present were, Director General, Sports Board Punjab, Salman Ejaz, Chairman, Chief Ministers Task Force on Sports, Ejaz Gull and Hamid Mirza Marketing Head Banka Alfalah, the sponsors of the event.
Saeed said in all twenty bouts will be held and a thrilling competition is likely to be witnessed in all the bouts , specially in the title bout in which Shahid will defend the title.
Praising the contributions of sponsors, the bank Alfalah, he said they are contributing a lot to revive traditional sports and they are regularly such activities to contribute in a national cause to promote sports.
He said top security arrangements will be made as a big audience is expected to watch the dangal.
Salman Ejaz said it was a healthy sign that a number of bouts will be contested in the dangal which aims at reviving and further promoting traditional style of wrestling which was once half mark of all the sports in sub-continent.
“Dangal and traditional wrestling are the part of our heritage and due to lack of patronage and sponsorship these activities could not organised which resulted in decline of these event”, he said adding “ Punjab Government is laying special attention to revive these games and dangals are the part of our endeavour to evolve a system to bring back wrestlers to this sport “.
Hamid Mirza of Bank Alfalah threw light on the various sports activities his organisation was sponsoring to motivate youth to get involve in sports for the creation of healthy society.
“We are not restricted to one game or any particular event, we doors are open to every sport as we have already sponsored major and minor sports of the country and sponsoring dangal is a part of our plan to pay attention to traditional sports which highlight our culture and traditions”, he added.—APP