In The Lair Of The Unknown Wrestler

Offbeat Magazine
The Akharas may be dilapilated and support of any kind may be non-existent, but the spirit of the Kushti fighter still burns undiminished, finds Vani Sreekanta. 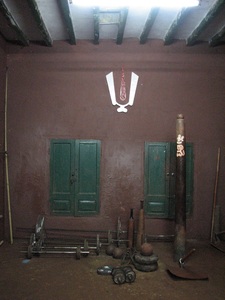 It took six autorickshaw drivers two days to figure out what I was asking for. And that means something. Let me rewind. When my editor asked me to do a story on local akharas, also known as gardis (traditional wrestling arenas), I spent days figuring out where they were located. A photo essay on the iJanaagraha portal told me to head to Cotton Pet, an article in a back issue of Time Out Bengaluru suggested Shivajinagar. Now, anybody who knows Bangalore will tell you that looking for an akhara in either of these locations on a google map is a bit like finding Gobi Manchurian in China. So, I asked around. When family, friends, and facebook failed, I did what I should have done to begin with. I asked my auto driver friends who hang around the café I frequent. As the wise say, a gang of auto drivers will usually be able to locate any place in five minutes. So, when they took their time, I knew I was searching for a memory.
Situated on a bylane of Shivajinagar close to Elgin Talkies, perhaps the oldest cinema hall in Bangalore, is Kale Bhai Ka Akhara. Sneeze and you will miss it. Here is the kicker, ask anybody in the city for the best biriyani in Shivajinagar, they will probably bring you here. 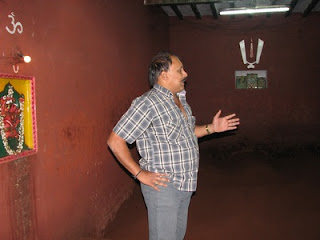 I knocked on the tiny green door behind which hides Kale Bhai Ka Akhara (which is close to a hundred years old, I am told) at 6:00 am and found myself staring awkwardly at Tanveer, a man who seemed seven feet tall. “No, you can’t meet Kale Bhai, he’s been dead for a while”, he stated, politely smothering a smile and ushered me in. I walked into another time. The place was dilapidated but clean; populated by men who, if possible, looked more awkward than I felt. Few women ever walk through these doors it seemed.
My visit to the even older Dodda Gardi (over 200 years) in the labyrinth that is Cotton Pet, proved that these things are standard at an akhara – burly men awkward around women, brought together by their shared love of a forgotten sport, practising in a rumbling old place, in pool sized mud pits called mattis.