Times of India
MOHAN NAGAR (Sonepat): Ask wrestler Anil Kumar what he used to do before joining the national camp at Sonepat and pat comes the reply: "Bhooton se kushti lada karte thhe (We used to grapple with ghosts)." 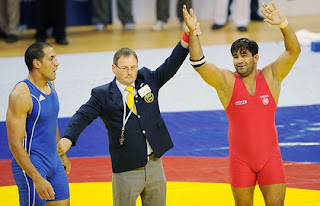 One of India's wrestling gold medals (96kg, Greco Roman) in the recently concluded Delhi Games came from a wrestler who virtually practised at a makeshift akhara on a cremation ground.

"After the district administration evicted my father from the Pehalwan Raghubir Akhara during an anti-encroachment drive, we had no place to go. The land was expensive and beyond our reach. The cheapest one we got was just adjacent to a cremation ground, so we were forced to train there," Anil said.


"The number of wrestlers at this akhara has been growing every year."

Along with the CWG gold medallist there are 30 wrestlers at the akhara, some as young as 11 years old, who have been living here and training for last two years. Though a five-foot boundary wall has come up to separate the akhara from the cremation site, by sunset the training centre gets engulfed in a cloud of ash and the putrid smell of burning flesh makes the job of wrestlers really difficult. Mornings don't bring relief either as industrial units bellow smoke or spew waste matter in the vicinity.

Amidst all this, the spirit of the pehalwan refuses to die.

Ironically, the number of wrestlers at this akhara has been growing every year. "This is the best akhara we have here," they say without batting an eyelid. "We get to practice on mat and the training here is free of cost," says 14-year-old Sukhi.

Sukhi and the others have been surviving on Rs 1500 per month they somehow manage to get from their families.

Though Sukhi's home is just 16km away, it has been months he last saw his family.

Braving the winter chill on the verandah does not deter them. And, it does not matter that these pehalwans share a dark and dingy room infested with mosquitoes and flies. Instead, they have an all-weather answer for their hardships, "Bhaisaab kushti ke baad vaise hi neend achchi aati hai (You get a good night's sleep after a hard day's work)."

Besides, it does not take much to wash away the bitterness of these struggling wrestlers: one gold is motivation enough. "Dangar charaya karte thhe gaon me aur kushti karte thhe kheton me. Ab jaa kar bhagwaan ne suni hai (As a child we tended to cattle in the village and wrestled on the fields. Now, God has finally heard us)," 32-year-old Anil bares his heart with a childlike smile.

Of course, one thing is bothering Anil these days - the Haryana government's announcement to give luxury cars along with cash prizes to gold medal winners.

"Yo gaadi kitne ki average deve hai bhai? 12-15 ki to deti hovegi, nahi to iska hi pet bharne me paisey pure ho javenge (What mileage does this luxury car give? Hopefully, 12-15 km per litre, otherwise all money will go in filling up petrol)," he says.

Post Commonwealth win, Anil is grappling with the army of kids in the joint family who have taken fancy to the glittering gold. "Bhaisaab we have to be careful of these naughty boys." A family of three brothers, all international wrestlers, have a cupboard full of medallions, and then some more mischievously hidden in the 'dangal' soil in the backyard. "These boys throw the medal away while playing with it," says Anil.

Along with wrestling it has been a tradition in the family to play with the spoils of victory. In his childhood, Anil was notorious for frequently trying to buy sweets with father Raghubir's medals at a nearby shop. "Now I realize how much it takes to win a medal."