New Delhi -- Narsingh Pancham Yadav did the unthinkable. Not only did he get India’s first gold at the Senior Asian Wrestling Championship, he did so by overcoming Iran’s Saeed Nematollah Riahi in the 74kg freestyle category. 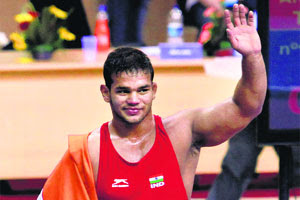 Nobody doubted his credentials before the bout, but taking on one of Iran’s best in the title clash wasn’t exactly going to be a cakewalk. Indian chief coach Jagmender Singh had predicted the fight to be one of India’s toughest in the campaign, and that’s exactly how it turned out.

The Iranian’s quick reflexes and fluid footwork had Yadav struggling to have a say in the bout as Riahi took the first point after he had the Indian youngster pinned on the mat. But the crowd favourtie hit back immediately make it all square at the end of the first period. The second peiord got off to a similar start, with both wrestlers earning a point each, but Yadav clinched another in the winning moments to lead India to its first gold medal in the tournament.

The wrestler from Mumbai, who trained at a suburban SAI Centre in the city, later dedicated this victory to the country. “Yeh desh ke liye (this win is for our nation),” Yadav said. The 21-year-old added the final bout was the toughest of his short career. 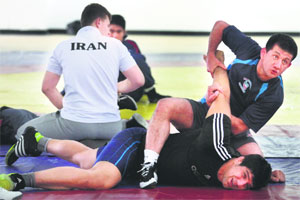 “The Iranians are the best in the business so the bout was easily the toughest I’ve had. But I am really happy after this win. Winning a gold medal at an Asian meet is huge and it was very important for me and the team,” he said.

The chief coach praised his ward for his ability to withstand the challenge. “He fought very well. His timing on the mat got us the medal today,” Singh said.