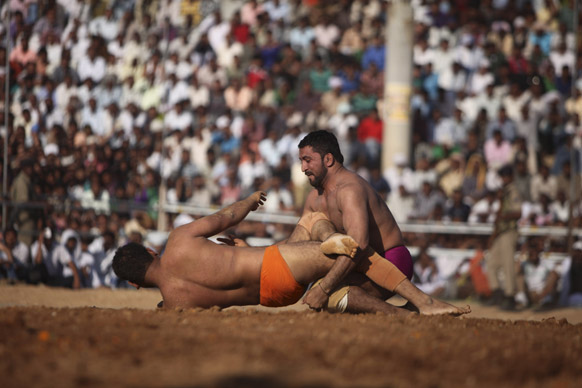 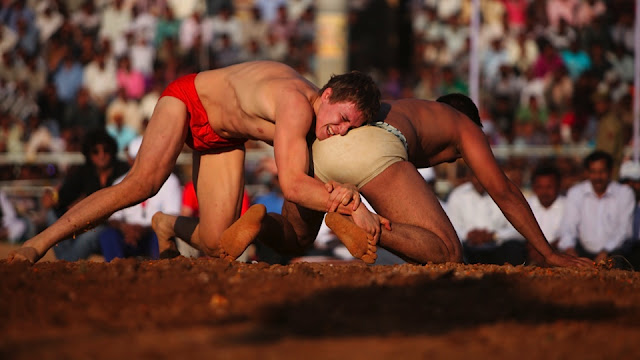 State Times
KATRA: Promising Indian wrestler, Yudhvir of Haryana lifted the prestigious 8th Mission Dosti International Indian Style wrestling title outplaying his rival from England, Leon in the final bout that played at the jam-packed Vivekanand Sports Stadium, on Sunday.
Wrestler Yudhvir was awarded with a cash prize of Rs 55,000 besides Silver Gurj and Patta. Runners-up, Leon of England awarded with cash prize of Rs 45,000.
In other main bouts, wrestler Vikram of Uttar Pradesh defeated Mohd Azam of Pakistan while another Indian wrestler, Paru trounced Jiwan Anwar of Pakistan. Likewise, Rinku of Delhi defeated Harab of Ukraine.
London Olympics medalist, Yogeshwar Dutta remained start attraction of the valedictory function. He was also honoured for bringing laurels to the country at the highest sporting event of the world.
Minister for Sports, R.S Chib was Chief Guest in this mega event, who gave away the prizes to the winners and runners-up of main bouts. Minister complemented the J and K Indian Style Wrestling Association, SMVDSB, District Administration and all other agencies for holding prestigious wrestling event at Katra to promote goodwill among the nations, especially the neighbouring Pakistan.
He said that India always favoured pleasant relationship with Pakistan and efforts were being made to promote peace and brotherhood in the sub-continent through the medium of sports. The minister said that government is committed to create adequate sports infrastructure in the state to enable the young players to display their sports talent in a big way adding that such activities promote harmony, brotherhood and peace.
Part of the ongoing Navratra Festival at the holy town of Katra, the wrestling championship was organised by J and K Indian Style Wrestling Association with the support of Shri Mata Vaishno Devi Shrine Board(SMVDSB), J and K Tourism Department, Jammu and Kashmir Police, Navratra Festival Committee, Katra Municipal Committee, District Administration and locals of Katra.
Besides Olympian wrestler, Yogeswar Dutt, President of J and K Indian Style Wrestling Association, Shiv Kumar Sharma was also honored.
Among others present were Legislatures, Balwant Singh Mankotia, Baldev Raj Sharma, Jugal Kishore Sharma, Lal Chand, Bharat Bhusan, DIG, Jagjit Kumar, Senior Superintendent of Police, Raghubir Singh, Addl. SP, Mohan Lal and president Wrestling Federation of India Ram Aasrey Yadav.