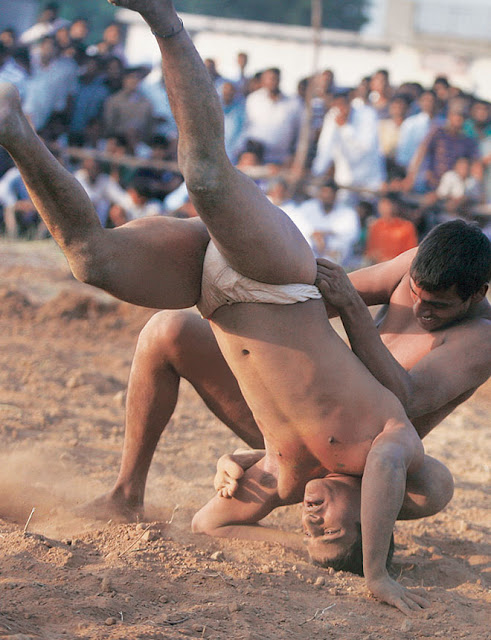 The sun was blazing down from above. On the ground people had gathered, braving the heat, to catch a spectacle which was quite removed from sundry life.

Shortly, two heavyset men arrived amid cheers from the onlookers. They entered an arena where a man presented them to the crowd. The man in question was the referee of the show. Known as a 'khalifa', he raised the arm of each man and announced him to the crowd - 'Krishan pehelwan Chandgi akhade se', 'Kapil pehelwan Guru Jasram akhade se'. The wrestlers exchanged a handful of mud, patted their thighs and launched into attack.

This is wrestling Indian style. Popularly called kushti, these are bouts fought in local wrestling events called 'dangal'. The dangals are where wrestlers from various akhadas compete and are the breeding grounds for state, national and international level wrestlers. This particular dangal happened at Shahpur Bamheta, a village near Mehrauli in Ghaziabad, located nearly 30 kilometres from the Capital.

The Bamheta dangal is an annual event held in the honour of a local deity. Organisers claimed the event is nearly half-a-century old, though regular participants dated the real fame of the event to the last five-six years, perhaps from the time when Sushil Kumar first won a bronze in 2008 Beijing Olympics and popularised the sport. Around 600 wrestlers come from various parts of Delhi, Punjab, Haryana and Uttar Pradesh and many claim to have been inspired after watching Sushil wrestle in such dangals in his heydays. 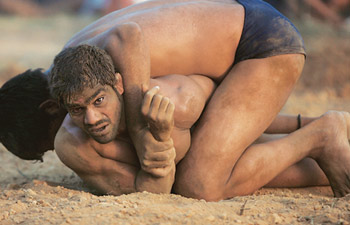 The whole affair starts by collection of funds. From the tents and public address systems to the prize money, every penny comes in the form of charity from the locals. Wrestlers from one locality and akhada challenge their counterparts from other akhadas for the prize money.

Bouts start from a two-minute, Rs.50 limit and increases gradually by a minute each, as better wrestlers take to the pit. Money in this case touched a maximum of Rs.51,000 with the 15-minute final bout between 'Vicky pehelwan' and 'Birju pehelwan'.

Money has always been scarce in this sport and one way to generate it is to place bets on one's favourite wrestler. A fighter sponsored by one person or his akhada declares a challenge of a particular amount open to anyone from the audience. Fighters, sponsored by other camps, awaiting this opportunity run towards him and the first person to grab the challenger's hand gets to fight him. Bouts ranging from Rs.2,100 to Rs.21,000 are fought, which essentially can be described as gambling.


"I was a four-year-old when I saw Sushil for the first time in a bout at Badarpur. He was a champion in those times as well and would win the highest cash prize bouts, which at that time was around Rs.3,000. Sushil and Yogeshwar Dutt were regulars at dangals," Kapil, a youth who trains at KD Jadhav stadium daily and once in a while participates in local wrestling events, reminisced.