Gladiators in the Mud 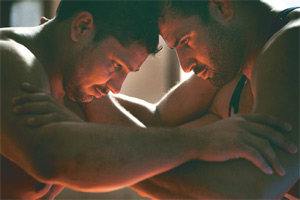 Followers of Indian mud wrestling or mitti kushti consider Parvinder Singh Doomcheri a legend. On afternoons when he doesn't have a bout, the 40-year-old can be found training at his akhara in his village Doomcheri, 33 km from Chandigarh. The akhara itself isn't immediately visible. To get there, you need to first cross an enormous building that houses a solitary multi-gym, then the wrestlers' quarters, a cowshed with several buffaloes, still more quarters and then Parvinder's house, all amidst vast fields of mustard. The largest in the village, the red and white three-storey building, has a few SUVs parked out front and a few other cars and motorcycles parked to the side. A large bully kutta — surprisingly friendly considering its reputation as a fighting breed — trots around. Some 20 wrestlers rest on the small square patch of earth shaded by an acacia tree. Wearing just a red loincloth, Doomcheri sits on the back of one of the wrestlers. His hair is matted with mud, and like the others, he is coloured in the burnt umber hue of soft clay.

There can be little conversation amidst the orchestrated chaos, strained faces and arched limbs. Long after the others around him leave to clean up at the water pump, Doomcheri continues to train. The young wrestlers at the akhara use mainstream metaphors to describe him, "He is like the Sachin Tendulkar of mitti kushti ," says one. "No, like the Salman Khan," corrects another. Indeed, Doomcheri, who is also a police inspector, has done his bit of acting. He played a wrestler who avenges his older brother's death in an epic wrestling contest with the villain in the Punjabi film, Rustam-e-Hind (2010).

Late in the evening, clad in a Tommy Hilfiger sweater, with wet hair covering his mangled ears, he could pass off as a well-to-do businessman. Although he was once an Olympic style wrestler, even winning medals at the junior nationals in the Greco-Roman category, Doomcheri now concentrates solely on the mitti form.

With wrestling's Olympic future uncertain, wrestlers like Doomcheri, the heroes of the mitti form, continue to draw in large crowds and generous funding. Doomcheri seldom regrets his choice. As a top pehelwan — he makes over Rs 50 lakh a year with some dangals wooing him with up to Rs 5 lakh a contest. Several hundred dangals are held across India with the main hubs located in Maharashtra, Punjab, Haryana and Uttar Pradesh. They are called jatra in Maharashtra, mela in most of north India, or chinch in Punjab. The weeks before Holi and Shivratri and then between Raksha Bandhan and Diwali are marquee time for Indian-style wrestling although contests take place through the year.