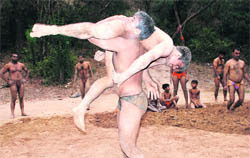 Chandigarh, April 21
Tucked amidst several trees between the Sukhna lake and the Chandigarh Golf course, a group of 35 young wrestlers grapple in a mud pit every evening.
Not many, perhaps not even officials of the UT Sports department, are aware of this “akhara” (wrestling arena), which has gone on to produce both state-level and even some national-level champions.
No one remembers when this wrestling arena came into being. But all agree that it has been in existence even before Chandigarh became a city. It continues to be a virtual second home to budding wrestlers who, by and large, are from both rural and economically weaker sections of society.
While the training part is free for all, the wrestlers here are expected to contribute to maintaining the wrestling arena. Besides, four budding wrestlers belonging to poor families - Kuldeep Singh, Sandeep, Harnek and Johny - are also being provided with the necessary diet from the meagre funds of the “akhara”.
For Kuldeep Singh, a class X student whose father is a munshi with a local advocate, the “akhara” is just like his second home. “At home, we get shelter, love, support and meals. All these things are provided to us here too.
The inmates of the akhara hail from nearby villages like Kishangarh, Nada and Mani Majra as well as slums located in the city and its periphery.
Managing its affairs without financial aid from any quarters, the akhara struggles to provide for its inmates. “Diet is our primary concern. With the daily diet of each wrestler costing around Rs 250, this is not a sport for poor,” said Raja Pehalwan, who had represented the country in the Takhti Cup held in Iran in the year 2000. He is now in charge of the akhara. Ironically, it is people from poor families who are into wrestling. But a wrestler’s diet requires items like milk, ghee, dry fruits, eggs and meat.
“The sport demands nourishment and healthy diet, but our families cannot spend so much. Getting a wrestler’s diet is a big help for us to pursue with our passion,” said Johny, a class VIII student in Nada whose father is a class IV employee in the water supply department. He daily commutes from Nada, located over 20 km away.
“For us, the ‘akhara’ is the most sacred place in this world, as it not only teaches us the utmost values of life but also provides us everything to make our future and life bright,” said Harnek Singh of Kishengarh. His father is also an employee in the water supply department and he had got admission in school on the basis of his performance in wrestling.
The “akhara” has groomed several internationally acclaimed wrestlers like Raja Pehalwan, a national level medalist, Vajender, a bronze medallist at the 44th national-level championship held at Amravati, Amit Kumar, a silver medallist from Punjab, and Ashok Kumar, another national-level wrestler.
“We want to provide many facilities to our wrestlers but scarcity of funds is a major constraint,” said Raja. Wrestlers rue that they get no help from the government and no one from the sports department has ever visited their site. “Ours is one of the oldest akharas of the city but we find ourselves completely ignored. Sometimes some philanthropists help us by giving donations in kind. We do our best to promote this sport from within our limited resources,” he added.
The only source of inspiration for the grappling school has been visits in the distant past by wrestling legends like Rustam-e-Hind Chandgi Ram, Olympian Rajinder Singh and Sarwar Pehalwan and Omveer Pal.