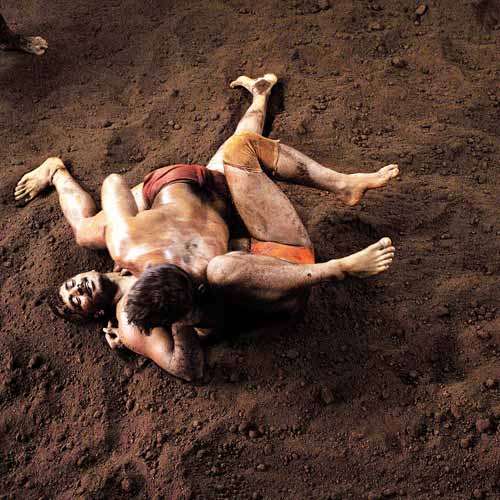 During the riots near Azad Maidan in August last year, 25-year-old constable Pradeep Jadhav managed to hold his own against a mob. The years he spent in an akhara (mud pit) training as a wrestler held him in good stead.

Jadhav is one of the rare few who is trying to cling on to a sport and culture that is perishing. From having 40-50 akharas in South-central Mumbai alone, the city has only about 15 akharas left today.

Established in 1930 by Bhausaheb Golatkar and Balakrishna Shivram to train youth for the freedom struggle, the Lakshmi Narayan Vyayam Shaala near Arthur Road junction is one of the oldest surviving akharas in the city. The number of wrestlers here has dwindled from 50 to around 15 and Jadhav is one of the last remaining wrestlers at the akhara.

The son of a farmer, Jadhav came to Mumbai from Chincholi in Sangli district at the age of 17and managed to enter the Mumbai police force by winning a state championship in wrestling. Other wrestlers at the akhara, however, are not quite as lucky. They work as private security guards, milkmen, vegetable vendors and a few of them are even unemployed. Around 8 to 10 wrestlers live on a makeshift mezzanine floor that’s built right above the mud pit at the akhara. Yet, they don’t complain.

“A wrestler’s dietary requirements are enormous and these youngsters spend whatever they earn on buying quality food,” says Prakash Tanawade, secretary of the Mumbai City Taalim Sangh (wrestling association). “These wrestlers eat according to how much they earn. It affects their performance,” he adds.

The average salary of these wrestlers is around Rs5,000 to Rs7,000. “Even bananas have become unaffordable, let alone almonds and milk that these youngsters need on a daily basis,” says Tanawade.

During Dussehra , the wrestlers earn money through dangals (local competitions), according to the weight category they fall under. But barring a few famous pehelwans, the regulars rarely earn a lot of money.

Tanawade says that the wrestlers want to represent the country in international competitions. But the wrestlers, who have come to Mumbai from Kolhapur, Sangli and Satara where wrestling is still a popular sport, confide that getting a job remains their topmost priority. Wrestlers Sagar Patil and Rajesh Jadhav, who have participated in state-level competitions, are without a job. “While we all start wrestling dreaming of an international medal right now all we want is a job to ensure regular income,” says Patil. Jadhav seconds Patil’s statement.

The latter part of the 1960s is considered the golden era of akharas in Mumbai, when mills thrived in South-central Mumbai.

They offered jobs to pehelwans and held inter-mills wrestling tournaments. Tanawade remembers the time he was employed by Khatau Mills in Byculla and won gold in the inter-mill competition for six continuous years before the mill shut down in 1998. With other mills’ closure, akharas lost their patronage and most of them, too, shut down. The rest are grappling to survive.

Box
But there are success stories. Narsing Yadav, who won gold at the Commonwealth Games in 2010, is son of a milkman and used to study in a BMC school. He built a reputation at the local akhara and was picked up by coach Jagmal Singh of the Sports Authority of India. From a nine-by-nine hutment, “Narsing is now deputy superintendent of police, drives a lal batti, owns a flat and is an Olympic medal hopeful,” says Singh.

I want to learn Kushti. Where is the location? whom can i contact regarding to it?