Creating a bridge between pehlwans and public 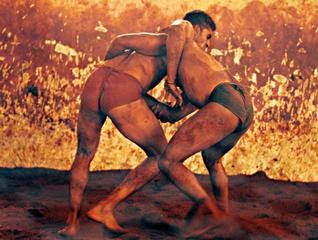 The very look of a pehlwan (wrestler) evokes admiration among onlookers, as they watch these hulks engaged in ‘nadakusti’ (traditional wrestling) on their ‘akhadas’.

Wrestling enthusiast K.J. Pavan’s photographs, which are on display at a gallery in Saraswatipuram here, depicts how this dwindling art still attracts steadfast followers to its practitioners in the garadi manes (gymnasiums) in the city. Nadakusti assumes significance only when Mysore Dasara festivities approach. Monday was the last day of the exhibition, which began on September 27.

A product of Chamaraja Academy of Visual Arts (CAVA), Mr. Pavan has followed the sport with passion since 2010, befriending pehalwans at the ‘Mitayi Annana Garadi mane’ in Mandi Mohalla. Nadakusti is not about continuing rivalry for life, it is more about camaraderie between the pehlwans, regardless of who wins or loses, he said.

The same spirit is being carried into the professional fights where if a pehlwan is injured in the fight, the winner attends to him with all compassion afterwards.

“They display a child-like innocence, which amazed me. It didn’t matter who won or lost, they respected each other,” he told The Hindu .

He revels in the fact that he was able to create a bridge between the pehlwans and the public on the opening day of the exhibition. Ustad Kullanna, head of the ‘Mitayi Annana Garadimane’ was the chief guest, accompanied by 30 other pehlwans. There were curious questions from the public on the diet regimen of the pehalwans.

According to Ustad Kullanna, it depended on a wrestler’s weight category. For instance, a heavyweight pehlwan would consume 25 eggs a day, 25 cups of sweet orange juice, and three to three and half litres of milk, each day, along with about one and half to two kg of chicken on alternative days.

A number of people who attended the opening had visited the garadi mane later to have a glimpse of what really transpired there, he said. “My pictures may not have technical excellence but have a kind of romantic approach,” he said.

He intends to put up all 5,000 pictures shot by him in a huge display sometime later. “Visitors can formulate their own opinions but I wanted to explore the garadi mane and share my experiences with the people,” Mr. Pavan says. He also rued the fact that the gymnasiums, once patronised by the rulers of Mysore and the people, had lost its sheen.

Mr. Pavan had organised an exhibition in Bangalore in 2009 on the junkyards (gujari) in Mysore. He had taken two years to finalise the exhibition taking time to mingle with the ‘gujari’ merchants.