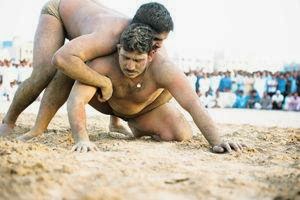 Every Friday at sundown, this abandoned dusty sprawl behind the Deira fish market is transformed into an Indian sub-continental background. The men, migrant labourers from Pakistan, India and Bangladesh, mill around, seeking company and release. Away from their families whom they see once in two years (some three), the Friday wrestling gives them some semblance of home and belonging.

They gather here in hundreds every Friday, to wrestle and watch and connect, but surprisingly there is no mention of this exotic spectacle in any tourist guidebook. This is just as well, for the authorities tried to impose a ban on their Friday entertainment. It would sometimes attract such enormous crowds that they would spill into the nearby markets, causing traffic snarls.

But, the wrestling hasn't stopped in 40 years. It is the only source of entertainment for migrant labourers.

There are no tourists (though everyone is allowed to come and watch) and the other well-healed Dubai migrants are surprised that such a gladiatorial event occurs in this swanky city. But Dubai can conceal just as well as it can put up an ostentatious show.

The migrant labourers, who built all that is new in Dubai — the skyscrapers, the malls, the chimerical islands off the coast — live their invisible lives here, unknown, unsung and often exploited.