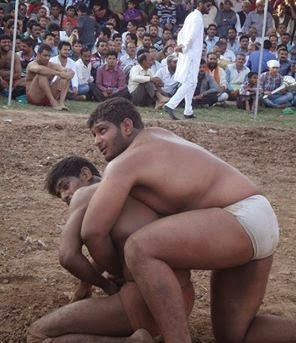 Reasi : “Wrestling for Nation” competition of Indian Style of Wrestling was organised at Moori near Katra as a part for electoral awareness campaign through sports across the district. The “dangal” organised under Systematic Voters’ Education and Electoral Participation (SVEEP) campaign Reasi Celebrating Democracy / Jashn-e-Jamhuriat drew participants and spectators from various areas of the district and sportsmen from other district as well.
District Administration in collaboration with J&K Indian Style of Wrestling Association and Peer Baba Moori Dangal Committee organised the competition in which wrestlers from the district and other states also participated. Prizes of 31,000 25,000 and 15,000 were given to the first, second and third winners by the association. SVEEP committee honored wrestlers with cash award of Rs 10,000.
More than 4000 persons from adjoining villages, panchayats and various places of the districts attended the rural sports event which lasted for more than 4 hours. A plantation drive under “Green Vote” was also organised near Katra.
District Election Officer (Deputy Commissioner) Reasi Dr Shahid Iqbal was chief guest on the occasion. The DC inaugurated the competition and also gave away trophies and cheques to participants and winners of titles in different categories.
Speaking on the occasion, the DC called upon the people to show same enthusiasm during forthcoming Lok Sabha elections and participate in greater numbers in an ethical way. He underlined the importance of rural sports campaign wherein Dangal, Kabaddi as well as fencing competitions have been organised to boost the morale of youth for electoral participation and take SVEEP campaign ahead as a youth mission. He thanked the volunteers for organising this competition and called for larger participation in forthcoming events as well.
Pledge of electoral participation was also administered by Tehsildar Rajesh Kumar and 3000 pledge letters was distributed apart from posters and caricatures on ethical and informed voting.
Shiv Kumar Sharma, President of Association, Rattan Singh Manhas and Sarpanchs of area expressed their views for strengthening democracy and extended support for the ongoing rural sports campaign. A series of dangals are lined up in next two weeks at Dera Baba, Reasi, Ransoo and Arnas for electoral awareness under SVEEP.
Players from J&K, Punjab, Haryana, Rajasthan participated in the competition. The DC thanked J&K Wrestling Association and Moori Dangal Association for their overwhelming support in organising the event.