Sushil Kumar Proves His Class
Y. B. Sarangi, The Hindu 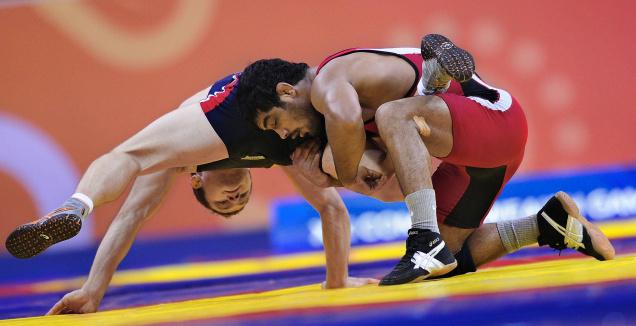 World champion Sushil Kumar proved his class to bag another freestyle gold medal for India even as two other home wrestlers narrowly missed the top honours in the Commonwealth Games on Sunday.

Sushil adopted a more aggressive approach after the break and overpowered Barnes like a python. His control and gripping was so strong that the South African was unable to make any attempt of wriggling out. The referee adjudged Sushil the winner ‘by fall' when he was leading 5-0.

The newly-crowned champion begun his victory run amid deafening noise as everyone in the packed stadium, including Congress president Sonia Gandhi, her son and party general secretary Rahul Gandhi, Delhi Chief Minister Sheila Dikshit and Organising Committee Chairman Suresh Kalmadi joined the rest in giving Sushil a standing ovation.
“I wanted to attack him (Barnes) as he was trying to run away from me. It is a big thing to win the gold medal (before the home crowd),” said Sushil. He added the title victory would boost his preparation for the Asian Games

Anuj, a silver medallist in the Manchester Games, beat Sierra Leone's A. Kalokoh (6-0, 6-0), Scottish Seon Keogh (2-0, 1-0) and Nigerian Andrew Dick (1-0, 1-1) to book a place in the title clash.
The home wrestler's impatience cost him the yellow metal as he hurried on to attack Inam in the second period after bagging the first 3-1.
The winner was ascertained through ‘clinch' following the scoreless third period. Inam won the toss and consequently the title. “I could not execute my plan. Like in Manchester, this time too luck deserted me,” said a disappointed Anuj.
Joginder, who beat England's Mark Cocker (5-0, 4-0) and Australian Denis Roberts (2-0, 1-0) on his way to the final, could not get past Canadian grappler of Indian origin Arjan Bhullar, a silver medallist in the Commonwealth championship last year.
Joginder, who had come in as a replacement for Rajiv Tomar after a positive dope test, went down in a ‘clinch' in the first period and picked up a leg injury in the next to end up at the second place.

Sushil Is Worth More Than Gold
Sudheendra Tripathi, Mid Day

It was a given that Beijing Olympic bronze medallist and world champion, Sushil Kumar would win gold in the 66kg freestyle wrestling event at the Commonwealth Games in the capital yesterday.
People, who know the sport, had even wondered humoursly if Sushil's opponents would take the field to compete against him.
After all, the 27-year-old, Baprola (near Delhi) native has inspired Indian wrestlers to believe they can beat the best. India's gold medal haul (10 golds) in wrestling alone is an indicator of this stunning fact.
"Earlier, coaches used to think that a wrestling bout against an Indian wrestler is as good as a walkover. Not anymore though. In fact, I was speaking to the team and they told me 'sir ab koi bhi aajaye, hum toh maar denge.' They are a confident lot and they have self belief. That has made all the difference," Sushil's coach Satpal Singh told MiD DAY yesterday.
The 1982 Asian Games gold medallist also felt that Sushil is responsible for this positive turnaround in wrestling. "Sushil has been doing brilliantly at the international level. And because he is so down to earth and approachable, people tend to like him. He shares his experiences with the juniors and has become a driving force for them," said Satpal.
Satpal believes that Sushil has single handedly popularised the sport in the country and that it is time to capitalise on this upswing.
"I have been associated with wrestling as a player and coach for the past 42 years. These packed stadiums remind me of the days in the 1980s. People used to come and support us in large numbers. The atmosphere today is just like it used to be some decades ago. I remember Indira and Rajiv Gandhi congratulating me when I won a gold medal at the 1982 Asian Games. Rahul Gandhi came and boosted the morale of the wrestlers on Saturday," said Satpal.
Sushil said: "I am happy to contribute towards India's medal tally." Sushil was in devastating form yesterday. He finished off Heinrich Barnes, 7-0. India also clinched two sliver medals in the form of Anuj Kumar (84kg) and Joginder Kumar (120kg). Anil Kumar won the bronze in the 55kg event.

Gold-Blooded Sushil
Leslie Xavier, Times of India
NEW DELHI: The swagger was unmistakably that of a champion but like his chiselled physique, not an extra ounce of arrogance. Sushil Kumar walked in at his own pace. 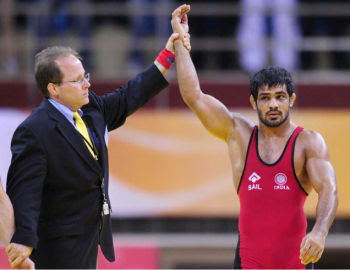 Such was the roar when he made his entry, the crowd never got a chance to know who their hero was fighting. The announcer simply gave up. Once it was all over, maybe you could argue that the rival never got to know who he had been fighting. Such was the speed, stealth and ferocity of a now trademark Sushil final bout of the 66kg freestyle category, a division he has made his own.

The final buzzed with expectation. Because, earlier in the day, Sushil was in sprint mode during the rounds, outclassing his opponents from Australia and Pakistan to enter the semifinals, almost as if a man in a hurry. Sushil snapped up his hapless semis opponent Famara Jarjou of Gambia in nine seconds flat!

Luckily, Sushil decided to spend a little more time on the mat. The little champ primed up South African Heinrich Barnes in the first period before dismantling him in the second with a swift single leg take-down followed by a scissor lock. The points simply racked up like the counter at a gas-filling station. The crowd went wild.

"You have no idea what it means for me to win gold at home. Winning here has been the best feeling ever," said a breathless champ later.

INDIA KI JAI HO IM PROUD TO BE AN INDIAN