Narsingh Yadav is shy and reticent not quite what you would expect from a 22-year-old basking in the glory of a gold medal win at the Commonwealth Games in Delhi. 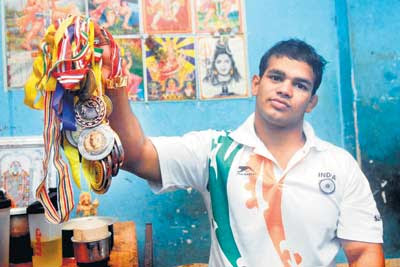 The wrestler, who struck gold in the 74 kg freestyle wrestling, said that the large crowd waiting to welcome him at the Mumbai airport on Tuesday surprised him pleasantly.
But when the MiD DAY team met him on Wednesday morning training at the Sports Authority of India complex in Kandivli, Yadav was trying to avoid meeting people, except those concerning his work.
A big crowd waited to meet with the champion wrestler but Yadav made time only to meet some children and autograph for them.
When asked why he was avoiding people, he replied that he was not.
"I don't mind meeting anybody, but I am just trying to stay away from places where there are big crowds and I would just get pulled and dragged around," he clarified.
One place where he appeared to be at his most comfortable was while playing throw ball with his fellow mates in the morning.
His coach, Jagmal Singh (50) said that while Yadav had been always been a shy person, he was never rude to anyone.
"The attention that he is getting from his well-wishers is exciting for him but it also upsets him when people act rowdy and pull him by his hands or clothes for a picture.
I am sure that he would not mind posing for a picture or giving an autograph or even talking to the fans for a while," Singh added.
Yadav, a junior ticket checker with the Indian Railways, realises that his life is changing rapidly as he transcends from being the boy-next-door to a gold medal-winning athlete.
In the past few days, he has been flooded with calls of invitations by politicians as well as other people wanting to get a piece of him.
But after his return to Mumbai, he had only a simple get-together with his family to celebrate his medal.
Although he has won accolades in wrestling at all levels all over the world, his win at the Games has completely changed the world around him.
"There are many competitions that I have won but I have never received so much attention.
All the fame and appreciation I am receiving now is immense and it makes me very happy. But I am not getting any time to rest," Yadav said.
READ MORE HERE