Tom Fordyce, BBC
It is just after dawn inside a walled compound in Old Delhi. To one side is a shed-sized temple to the Hindu god Hanuman, surrounded by shady jamun trees; beyond that the sandy banks of the grey-green greasy Yamuna river. In the middle, inside a squat concrete bunker, a group of stocky, sweating Indians are throwing each other around like rag dolls. 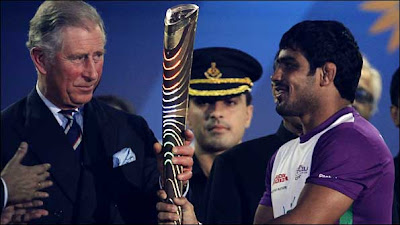 This is the Chandgi Ram wrestling club, the Delhi equivalent to the Thomas a Beckett boxing gym on London's Old Kent Road or Detroit's Kronk gym, a legendary production line that has produced some of the country's most decorated fighters.
I've left the spruced-up stadiums and endless security checkpoints behind to find the roots and reasons behind something that's been intriguing me all week: India's love of the grapple game.
Forget the hockey, or the tennis, certainly the athletics and even the shooting. The most popular sport at these Commonwealths so far has been wrestling; the most eagerly-anticipated appearance that of pugilistic pin-up boy and world champion Sushil Kumar on Sunday, seven days after he handed the Queen's baton to Prince Charles at the opening ceremony.
Even with the wooden shutters pulled back, the main room is steaming. In the middle of it all, forearms like hawsers and ears as mangled as a prop-forward's, is Jagdish Kaliraman - five-time Indian champion, proud proprietor and central figure in one of India's key wrestling dynasties.
"My father was a legendary figure in the world of wrestling," he tells me, keeping an eye on his charges are they back-flip and handspring around the yellow, foam-padded floor. "He went to Olympic Games, won lots of international competitions and then founded this club. He used to say, 'God has sent me for one purpose: wrestling.'"
As the early-morning sun creeps through the open windows, a group of around 20 athletes sprint shuttle runs from wall to wall, running first, then rolling head over heels, then scampering on all fours. Chests heaving, they split into pairs and leapfrog each other across the room.
"Wrestling is a traditional pastime in India, going back to ancient time - to the Ramayana and the Mahabharat, back to the Hindu gods," Jagdish tells me. "We have a great history of wrestling and a great appreciation of it."