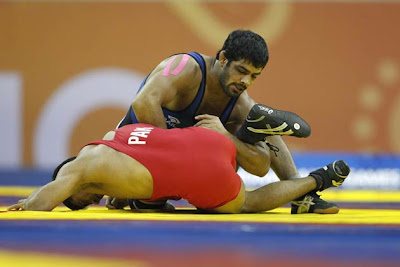 Sushil, who won his world title at Moscow, got the better of his South African opponent Heinrich Barnes 7-0 to prevail to gold in a full Indira Gandhi stadium.
His win took India's Gold tally to 28. Bronze was won by Canada's Chris Prickett, who overcame Pakistan's Muhammad Salman 8-4.
Delhi chief minister Sheila Dikshit was present at the medal ceremony and congratulated Sushil on his victory.
Congress President Sonia Gandhi was also present with her son and Congress General Secretary Rahul Gandhi.