Narsingh, Dutt keep golden run going
From Josey Samuel, New Delhi, Oct 9, DHNS:
Such was the excitement at the wrestling arena that young and old alike danced on the floor of Indira Gandhi Sports Complex as Indian grapplers picked up two more gold medals on Saturday 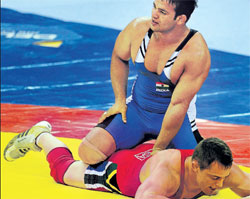 Boosted by the presence of AICC general secretary Rahul Gandhi, freestyle grapplers Yogeshwar Dutt and Narsingh Panch Yadav swelled the hosts’ tally of yellow metal in the wrestling competitions to nine.
Comeback man Yogeshwar swept aside Canadian James Mancini 9-2 to pocket the 60kg title while Narsingh edged out South African Richard Bri Addinall 4-0 to clinch the 74kg crown.
“I am happy to win the gold and really hungry to win more gold medals for the country,” said Yogeshwar, who was out of the sport for year and a half due to a knee injury.
In front of an almost packed house, cheering for the home heroes every second, Yogeshwar went into lead in the initial seconds with minor takedowns of two and one point each.
With three points in his kitty, the 28-year-old Commonwealth Championship gold medallist caved in for a brief period of time. Pouncing on the opportunity, Mancini opened his account, claiming one point by a takedown.
In the second period, the Delhi-based wrestler, who won bronze in the Doha Asian Games and also entered the Beijing Olympic quarterfinals, mixed aggression with caution to increase the margin to 6-1.
Though Yogeshwar’s attempt to pull his opponent’s leg landed him in trouble, the Indian recovered in time but conceded an easy point. Yogeshwar, however, completed the formalities with three more points.
Wrapping himself in the national flag, Yogeshwar took a victory lap before exiting to the gallery to meet Gandhi as the stadium erupted in a deafening cheer.Then, it was the turn of Narsingh to prove his mettle. Narsingh, who had scored a hard-fought 3-1 semifinal win over Evan Macdonald of Canada, again played a tough bout in the title round. 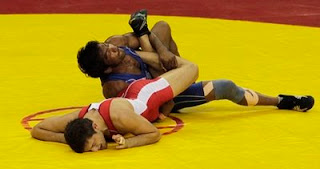 Dutt's the way. Aha! Aha!
Leslie Xavier, Times of India
NEW DELHI: Yogeshwar Dutt is not new to struggle. Each time he's faced an adversary, whether on the mat or in life, the rugged wrestler from Haryana has been able to tap deep into hidden mental or physical reserves to come out on top. 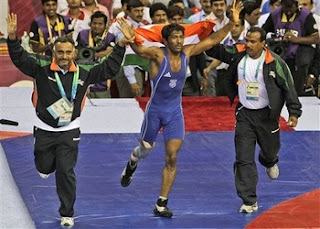 Just a year back, his grit and perseverance got him through a career-threatening knee injury which kept him out for more than a year. Yogesh never flinched. He banked on his willpower to drag himself through the pain of rehab, and slowly got back on top of his game.
And on Saturday he pulled out those hidden reserves of strength again, this time on the exposed ankles of his helpless final opponent - James Mancini of Canada - to win gold in the 60kg freestyle category at the Indira Gandhi Sports Complex.
As a deafening roar echoed from the crowd, the wrestler, tired limbs magically springing back to life, went about his victory lap. He ran around the three mats and then went on to the stands, meeting close friends and family and even a new-found acquaintance in politician Rahul Gandhi.
"I was really low when the injury happened. It is just my will power and training that has helped me overcome that bad phase. Even last month I had a bad outing at the World championship. I had to get over that disappointment and refocus to win gold here. Now again I will refocus, right from tomorrow, to win gold at the Asian Games," said Yogesh, before resuming his unending victory lap.
And just when decibel levels had dipped, things got louder. This time it was Narsingh Panch Yadav who triggered the extra bit of punch, muscling his way past Richard Brian Addinall of South Africa to win gold in the 74kg category.
Yadav came into the team as replacement for Sumit, who was suspended for a doping violation. The Mumbai wrestler grabbed his opponents, as well as the opportunity, with both hands to add the Commonwealth Games gold to his ever-increasing kitty, which already has the Asian and Commonwealth championship titles.
Yadav played a safe game against Addinall, keeping the South African in a shoulder hold for most part of the bout before using sudden bursts of power and pace for pushouts.