THE NATION
LAHORE – Tari Pahlwan of Lahore clinched the Flood Relief Dangal title which was organised here at the Wrestling Stadium to help raise funds for flood affectees. 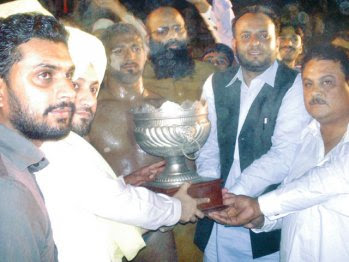 The Lahore Wrestling Association and Arshad Bijli Pahlwan Foundation jointly organised the dangal at the Iqbal Park Wrestling Stadium for the noble cause and around 20 bouts were held on the day.
Tari Pahlwan clinched the main title bout by downing the champion of Lodhran Shahid Dahria. In the second main bout of the day, Papu Pahlwan Lahoria beat Usman Gujranwalia to lay his hands on the second prize.
In other bouts, Janu Pahlwan beat Mir Ali, Asif beat Ja hara, Qamar beat Jan, Kuttu beat Nomi, Umar beat Abdullah while Mitthu-Baba, Shahbaz-Zahid, Mama-Danish, Ali-Junaid and Usman-Hamza fought out a draw.
Deputy Speaker Rana Mashood was the chief guest while Khawaja Imran Nazir and Haji Zulfiqar were also among the guests and distributed the prizes among the winners.