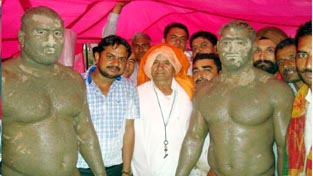 SAMBA, June 17: Wrestler Amin Benia of JKP and Jagroop of Amritsar today shared the historical “Sidh Swankha Kesari Dangal title” organized by Bawa Sidh Goria Nath Ji Committee in collaboration with district administration at village Swankha, Ramgarh.
The first bout, which was fought between Wrestler Amin Benia of JKP and Jagroop Amritsar, ended in draw and both were declared winner.
On the decision of the organizing committee, Rs 25,000 was awarded to both Benia and Jagroop.
Meanwhile, the second bout was clinched by Pamma of Punjab, who crushed Tinku of Delhi.
The third bout held between Zakir Hussain of Jammu and Ranjit from Ludhiana also ended in draw.
On the occasion, Former Minister and Member Legislative Assembly (MLA) Surjit Singh Slathia was the chief guest, who awarded the winners in presence of Mahant of Bawa Sidh Goria Nath Ji Gaddi Girdhari Nath, Mahant Pir Ravi Nath, Tehsildar Vijaypur Avtar Singh Jasrotia (Nodal Officer), Rampaul Sharma, Moni Sharma, Devinder Singh and Baldev Singh, Sarpanchs, Tirath Bhagat, Manohar Lal, Ashok Kumar Angurana, Kuldeep Raj, Ashok Sharma, local populace and sports lovers.
While speaking, Slathia asked the youth to participate in the sports activities to keep their mentally and physically fit.
He said that sports plays pivotal role for overall development of the body.
Slathia impressed upon the youth to stay away from the menace of drugs. MLA asked the youth to play the games with true sportsmanship.
Slathia assured all type of help in future too for the development of sports infrastructure in the district.
In the aforesaid wrestling competition, wrestlers not only from J&K but from other states also participated and exhibited their talent. Around 115 wrestlers participated in the competition from in and outside J&K.