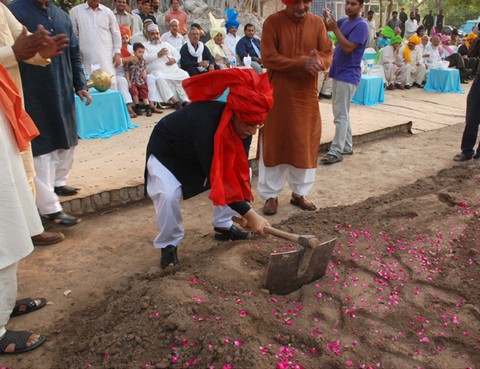 Punjab University is said to be the largest and oldest university in Pakistan which was established even a few decades before the establishment of Pakistan on the map of the world. Well, Punjab university is not only famous in the region for the educational and academic activities but it has also encouraged the students to engaged themselves in the sports as recently a step has been taken by the Punjab University in the same concern.
The Vice Chancellor of Punjab University Prof Dr Mujahid Kamran initiated a wrestling ground for the Desi wrestling known as Pahalwani in the premises of New Campus hostels ground. He has initiated Akhara (wrestling arena) in the ground of the hostel for the students who are interested to take the part in the Pahalwani. During the ceremony he also requested to the leaders of winning party of general election 2013 PML-N (Pakistan Muslim League-Nawaz), Mian Nawaz Sharif and Mian Shahbaz Sharif to pay a special attention on this desi wrestling and save it from getting demolished from our culture.
Director Sports Prof Dr Syed Mansoor Sarwar, Chaudhry Liaqat, Haji Sirajuddin Muhammad Saeed, Pride of Pakistan Haji Muhammad Afzal, Lala Pahalwan, senior faculty members and wrestlers and many of the students were also present on the event.