Chattrasal Stadium is located in Model Town of New Delhi, off the highway to Karnal in Haryana. It was renovated last year for Indian athletes to train for the Delhi Commonwealth Games. It is also home to India’s top wrestlers — this is where they train, eat and live. Everybody knows where the person I want to meet lives. A brand new Ford Endeavour is parked outside the room. Sushil Kumar, India’s first Olympic medalist in wrestling since 1952, shares this room with fellow wrestlers — seven or eight of them. After the bronze at the 2008 Beijing Olympics, Kumar was offered a separate room, but he turned down the offer “because it would have set a wrong example for the young wrestlers”. But it isn’t one of the cramped rooms that most wrestlers have to contend with — it is spacious and has a laptop, television and refrigerator. 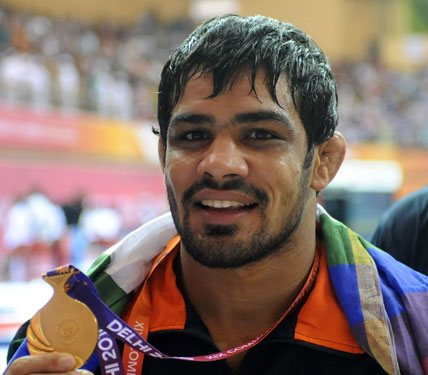 The room is closed because the wrestlers are getting ready for training. Coach Yashvir Singh gives a curious look, as he too waits for the famous occupant of the room to come out. There’s time to kill and Singh orders cold drinks from a nearby canteen, and begins to talk fondly of his shagird. “Sushil is a very sober, hardworking and disciplined boy. He has a lot of respect for coaches and other wrestlers.” Singh ought to know — he has worked closely with Sushil since 1998. “If we ask him to do 300 push-ups, he’ll do 400.” When he sees the raised eyebrow, Singh adds: “Ek sapate mein 500 push-ups kar leta hai (He does 500 push-ups in one go).”

Just then, Sushil walks out. A bronze in the Beijing Olympics of 2008, gold at the World Championship in Moscow last year and at the Commonwealth Games of 2010 — Sushil is India’s greatest wrestler of all times and the country’s brightest hope for next year’s London Olympics. He is short — not more than five feet six inches — but is built compactly. The muscles are all there to see under his white T-shirt and black shorts. Then there are the cabbage ears which every pehelwan wears like a badge of honour. Yet to recover from the numbers thrown by Singh at me, I ask: “How many push-ups can you do at one go if you were in a push-up competition?” He doesn’t hesitate for a moment. “Double. I’ll do 1,000 push-ups.”

The strength and confidence can be attributed to years of practice and a good diet. Sushil is a vegetarian. His diet includes three kilogram of fresh milk, a bowl of white butter every day, and 10 to 15 kg of almonds a month, apart from regular food. His monthly expense on training and diet is between Rs 40,000 and Rs 50,000. Money should be the least of his worries now. Even before the medal in Beijing, his family made sure Sushil’s diet requirements were fulfilled. His father, Diwan Singh, would carry on his bicycle milk and butter for his son every morning. The daily routine still continues, the only difference is the bicycle has made way for a car. But Sushil has been asked to go slow on food these days. “We have reduced his diet as we need to maintain the weight,” his coach says. Wrestlers compete in different weight categories — weight gain can put you in a different category than what you train for. Sushil takes part in the 60-kg category.

The akhara or the wrestling pit now has over 125 wrestlers including some big names like Yogeshwar Dutt (eigth at Beijing), Sumit Sehrawat (silver at Delhi Commonwealth Games) and Praveen Rana (gold medalist at the Youth Commonwealth Games), among others. There’s Jat machismo all around, but one man hogs the limelight. Everybody holds Sushil in high esteem. “With his experience he guides us a lot while training in terms of technique. Despite his achievement he’s the same for all,” says Sehrawat.

Sushil has been out of action for a while. The reason was his marriage to Savi, the daughter of Coach Satpal Singh (gold at the 1982 Delhi Asian Games), in February. He joined training just 15 days back. The marriage also gave him the time to recover from an injury that happened during the Delhi Commonwealth Games. Wrestlers, during their best years, choose to live as celibates like their favoured God, Hanuman. Women, they are told, distract them from training and make them feeble.

No such setbacks for Sushil. “Savi has been very lucky for me. Jab se rishta pakka hua hai, I haven’t lost to anyone. In fact, I haven’t given a single point to my opponent,” he says. So, not just is he fond of his wife but also distinctly remembers all his bouts. Clearly, the memory is as good as his bouts. The 27-year-old wrestler from Baprola, a small village in Delhi, freed wrestling from the tag of mud pits and heavily-oiled wrestlers, and made people believe that medals can be won at the international level. Sushil’s interest in wrestling awakened at the age of 12 when he first saw his father wrestle at a function. After two years, his father put him under the guidance of Satpal.

The wrestlers train twice a day. The morning session starts at 4.30 am and stretches till 8.00 am. Sushil and other wrestlers run 2 km, followed by light stretching and some mat practice where wrestlers get to improve on their technique. The next session from 4.30 pm till 7.30 pm, the one which is all set to begin now, is more intense. It includes jogging followed by yoga. There are also push-ups, rope climbing, hand ball, football and technique practice. The wrestlers train six days a week. Sushil, because of his marriage, goes home Saturday night and comes back Monday morning. “Elders in the village expect me every Saturday and wait the whole week to talk to me,” says he.