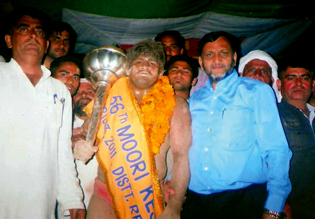 The AGMO of Udhampur, VK Sharma was guest of honour. Former Sarpanch, Anil Kumar, Chuni Lal Ramotra, president, Salora Dangal Committee and Bittu Raina were among other prominent present. In all, 43 bouts were decided in this day-long dangal, which was organized by Moori Dangal Committee under the aegis of Jammu and Kahsmir Indian Style Wrestling Association.

The second main bout, Parveen of Khanna in Punjab held Kulbir of Kot Bhalwal in Jammu to a draw after fighting for 23 minutes. Both these wrestlers were given away  Rs 3,500 each as cash prize. In the third bout Babu of Attati Border in Punjab defeated Fijja of Billawar in Kathua. In the fourth main bout, Anil Kumar (Mohanu) of J&K Police emerged winner after he downed Malkiyat of Attari.