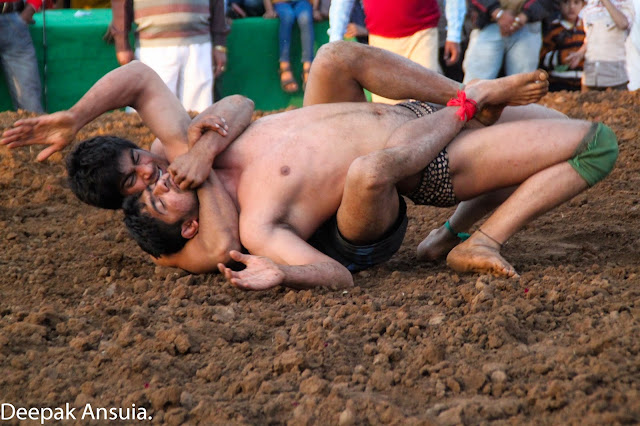 In the said dangal 34 bouts were played. An expenditure of Rs 85,000/- has been incurred for the conduct of this one day wrestling event. President J&K Indian Style Wrestling Association Shiv Kumar Sharma inaugurated the dangal who was accompanied by Sarpanch Sham Singh, AE Bishan Dass and Naresh Kumar. Wrestlers from Delhi, Haryana, Punjab, U.P and J&K participated.

The first main bout was fought between wrestlers Lallu of Jammu versus Amrit Paul of Goal Bagh Stadium Amritsar. This bout was won by Lallu that lasted for 25 minutes. Winner Wrestler Lallu was awarded with cash prize of Rs 6,000 by D.SP Katra Dr Ashok Kumar and Shiv kumar Sharma while runner-up wrestler Amrit Paul got Rs 5,000 by Sarpanch Sham singh and Naresh Kumar (Pappu Lakri).

2nd main bout was won by Amir Khan of Nargada of Bajrangi Akhara Jammu who defeated Basant of Amritsar. Winner Amir Khan was awarded with cash prize of Rs 5,000 while runner-up Basant got Rs 3,000.