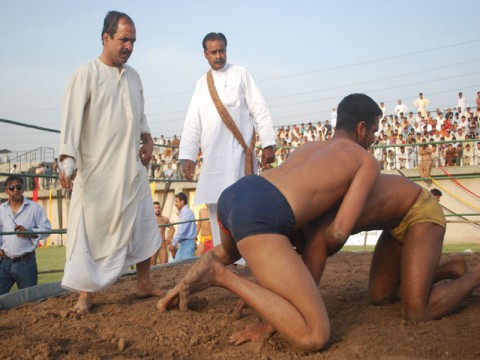 Bashir took 15 minutes to defeat Dahya Pahlwan and won the title over points. Dahya had no answers to the former Rustam-e-Asia’s tactics and techniques that entertained the fans to the fullest.

The event was sponsored by World Call Oman Telecommunication, Gujrat and Royal Fans to promote traditional sports as well as attract national and international donors.

The first Dangal started at around 4:40pm and 20 wrestling matches were contested. Usman Pahlwan of Sialkot defeated Azam Laraka, Umi Pehlwan of DG Khan beat Bala Jee of Shahdra while fight between Ahmad Butt of Lahore and Azam J Khan of Multan was ended in a draw. The winner’s received cash prizes ranging from five thousands to one hundred thousand in different weight categories along with trophies.