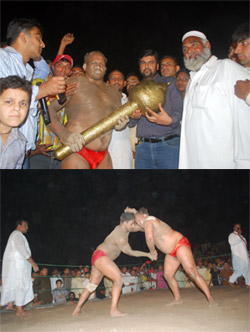 Bashir took 15 minutes to defeat Dahya Pahlwan and won the DK title over wrestling rules points. Owing to his experience and expertise, Bashir was easily able to overpower Dahya, who in fact did not have any answer to the former Rustam-e-Asia’s tactics and techniques that entertained the fans to the fullest.

The Dangal aims to promote traditional sports as well as attract national and international donors.

The first Dangal started at around 4:40pm and 20 wrestling matches took place in total. The winners received five thousand to one lakh cash prizes and trophies in different weight categories.

Wrestling lovers including pehlwans, khalifas and masters of the art who had gathered from all over Punjab at the Iqbal Park Stadium to watch the Dangal.

With Dangal Kinges title in bag, Bashir now sets eyes on winning the next DK title match to be held next month in Iqbal Park Stadium.

Other than the main title, there were 19 more dangals lined up to set the tempo of the day and to the surprise and frustration of all those present in the stadium, two of them ended in a stalemate. But the main dangal amused all those present on the occasion. Talking to Daily Times, Bashir said, “I never take my rivals lightly. Any pahlwan who enters the field comes with full preparation and I never take my opponent lightly. Before any dangal I acquire hard training and ensure I don’t flounder.”