New Delhi, April 28 - India’s Beijing Games bronze medal-winning wrestler Sushil Kumar, who Friday booked his London berth, feels every fighter is on the lookout for an “element of surprise” in the fighting style as every wrestler is studying every other potential rival going through the tapes of bouts.

The 28-year-old Delhi wrestler, who won gold in the 66kg event in the World Qualifying Tournament in China, said his brief training stint at the US Olympic Center in Colorado Springs in January helped him a lot and he is ready for London.

“Every wrestler has to change his style and technique regularly. It helps to keep the opponent guessing. Change was badly needed. My opponents are watching my videos everyday and they can easily analyse my fighting technique. It is important to change style regularly. It was a tactical decision and I hope it will work at the Olympics,” Sushil told IANS in an interview, adding that he decided to change his style after he failed to defend his World Championship title last year.

Sushil tested his new style at the Dave Schultz Memorial International Wrestling Tournament in Colorado Springs, where he won the gold medal. But he struggled in the first Olympic qualifier at Astana last month. 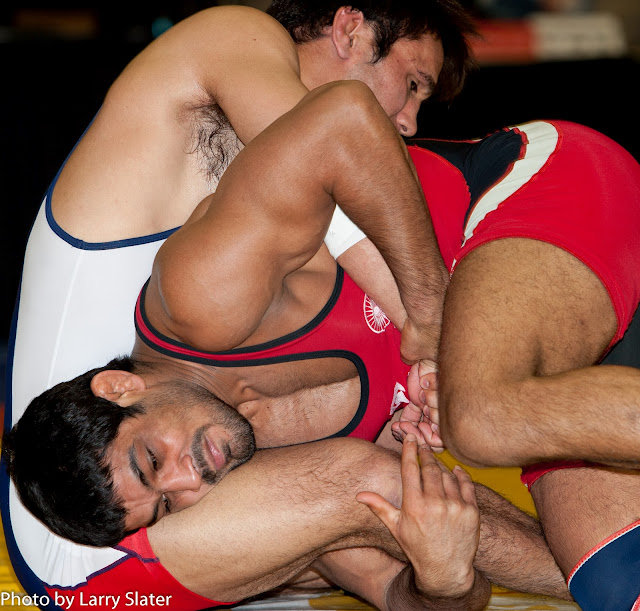 Sushil, however, was in sublime form at the World Qualifier in China last week. He defeated Georgian Otar Tushishvilli, also a Beijing Games bronze medallist, in the final Friday to book his ticket to London.

Asked if it was the right thing to experiment a new style in the Olympic year, Sushil said: “It doesn’t matter. We had six months to prepare and that is enough.”

Sushil said he had worked hard on his closed stance.

“In fact, it is a mix of both closed and open stance. This is the latest trend in international wrestling and is followed by all the top wrestlers in Europe. I have also worked on my defence and counterattack. In fact I have worked hard on how to gain maximum points from counter-attack,” he said.

Sushil said he has also improved his ground wrestling skills.

“There has been a great improvement in my ground fighting skills. I have worked on off the ground (standing position) techniques,” Sushil told IANS.

Sushil said he has now adapted well to the new fighting style.

“I have adjusted to the new style well. I did well at the Dave Schultz event. But in the third round of the semi-final bout (against Kazakhstan’s Akzhurek Tanatarov) in the first Olympic qualifying bout I was not given a valid point. I saw the videos of the match and found that the referee erred in his decision which proved costly for me. But now things are working fine for me,” said Sushil.

Sushil said he was aware of the pressure of expectations since he remains India’s brightest medal prospect at the London Games.

“I am used to it. But frankly speaking there is no pressure on me,” he said.

Suhil said his Olympic bronze medal had changed the outlook of Indian wrestlers.

“Earlier for us winning a medal in the Olympics was enough. But now we aim only for gold. There has been a huge change in our mindset,” he said.

Sushil and boxer Vijender Singh, also a bronze medallists at the 2008 Beijing Olympics, came agonizingly close to missing the 2012 London Games but both eventually made it thumbing their nose at their critics.

First Vijender qualified grabbing the last opportunity after some suspense earlier in the month, and now Sushil got through to London after missing out in two qualification events earlier.

Both realise that thanks to technology the styles of fighting and techniques have taken the competition in their respective disciplines to higher levels and that they cannot be left behind their global opponents.

While Vijender made light of the pressure, saying he does not feel it, Sushil was worried about refereeing, having had a bitter experience in the earlier qualifiers. With Sushil’s qualification, all three Indian medal winners at Beijing — gold-medal winning shooter Abhinav Bindra being the other — are through to London.

Significantly, Vijender qualified for both the Beijing and London Games from the qualifying event at Astana, Kazakhastan, while Sushil failed there in an earlier qualifying event before making it in style by winning the gold medal at the Taiyuvan (China) qualifiers Friday.