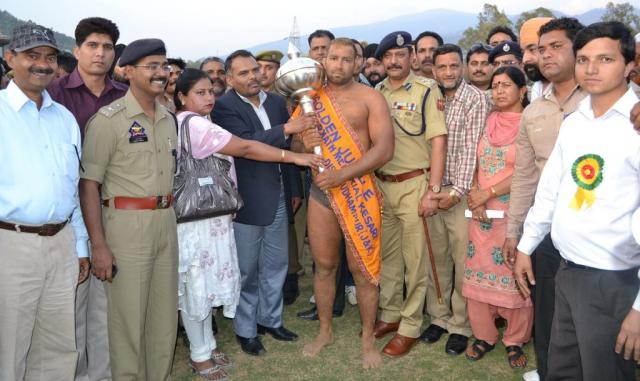 The wrestling matches were organized by Amar Nath Dangal Committee in collaboration with Mukti Youth Club (MYC), Udhampur. The winner of the match was awarded Rs.4500 and Silver Gooraj while as runner up of the match was given Rs. 3000 cash prize by the Deputy Commissioner, Udhampur, P.K. Pole, who was the chief guest while Deputy Inspector General of Police Udhampur- Reasi range, Jagjit Kumar guest of honour on the occasion.

As many as 38 bouts were held during the wrestling match with the participation of about 76 wrestlers from within and outside the state. The wrestlers who were repeatedly chaired from across the jam packed Subash stadium who showed their excellence in wrestling art included Soni, Atterdin, Ajay Sharma and Abdul Rashid.

Speaking on the occasion, Deputy Commissioner, Pole lauded the efforts of Chairman, Amarnath Dangal Committee, Udhampur in organizing the dangal at Udhampur every year which is aimed at boosting the morale of wrestlers besides providing a source of entertainment to common people. He said events also keep the wrestlers physically fit and mentally sound adding that healthy persons could also contribute in shaping the future of the society in a better way.

Deputy Inspector General of Police, Jagjit Kumar lauded the efforts of Dangal Committee and Mukti youth club in making the dangal a grand success. He extended his warm greeting to all the wrestlers who participated. DIG made an appeal to the young generation to adopt wrestling sports for healthier life and bright future. He also announced that police would give full support to make this dangal event a mega dangal and would be taken under J&K Police Civic Action Programme next year. Chairman of Dangal Committee, Mrs. Geeta Devi extended thanks of Deputy Commissioner, DIG and all those who extended financial and physical support in smooth conduct of the wrestling match. She urged for continuation of support to make the event a grand success every year in Udhampur.