Wrestling to Survive in Kolkata 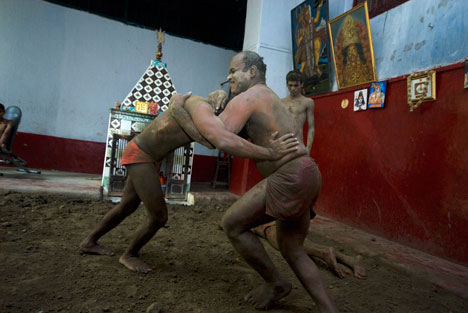 After 500 push-ups, 600 sit-ups and a workout with the Gada (Indian club) it is time to face his disciples at the akhara (ring of wrestling). After two hours of tireless kushti (wrestling) with his students, Pal Babu gets a soothing massage from his disciples. Mahendar Pandit (48 years), alias Pal Babu, adopted this routine only for last 10 years at the Shree ‘Swami Gyan Yoganand Parimath’ at 126 Cotton Street, which has been a wrestling venue for the last 95 years. The ashram is at the end of a dark, narrow lane near Burrabazar in Kolkata, India. Those who enter the lane have no idea what is coming at the end of the damp and dark alley. However, it surely gives a feeling of nostalgia, as hundred-year-old buildings stand side by side forming those very narrow lanes. This feeling intensifies as one enters the ashram, where the disciples of the late Swami Gyan Yoganand, the founder of the ashram, run a full-fledged akhara.

Unfortunately, akharas face the risk of extinction today. “Most teenagers in the city, who are conscious about their physique, prefer a modern gymnasium to an akhara,” says Manoj Sonkar, one of the present gurus of the ashram, “and those who come to learn are constrained by their economic conditions to learn it properly”. Any physical exercise needs proper diet that these students can hardly afford. “For Pahalwani milk is essential, which many of the disciples cannot buy,” says Mahendar Pandit, one of the present gurus of the ashram who works in a Papad (Indian flat crispy bread) factory for a living. 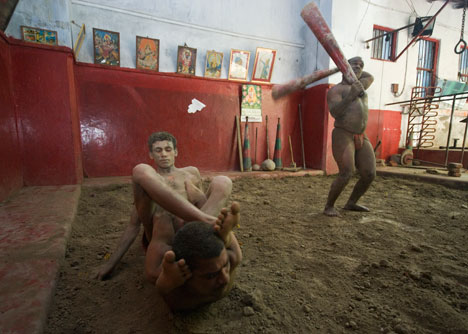 The scenario was not like this even 40 years back, when akharas used to be the only place for bodybuilding. With the advent of hi-tech gyms and various steroid-stuffed capsules, the akharas have lost their former glory and importance. “When I first came here 10 years ago, this akhara used to be full of people from Bihar or UP who had migrated to Kolkata for their living. But nowadays the number of these migrants has reduced,” says Pandit. Echoing Pandit’s feelings Ashok Kumar Agarwal, the 65-year-old trustee of the Ashram says, “I used to come here in my childhood. At that time, I still remember, the place used to be chock-a-block with people, but as time passed the crowd became thinner.” However, the akhara has managed to survive with more than 30 devoted members. In return for their commitment to the ashram, they receive lessons on wrestling from their gurus.

Mahendar Pandit, Manoj Sonkar and Suresh Yadav are the gurus who work tirelessly to keep alive this ancient art and tradition of self-defence. “Whoever comes to learn kushti in the ashram is trained for toughness with the help of various exercises. Once we are satisfied with his physical strength, we start teaching them different techniques of Pahalwani,” says Pandit. Achieving physical strength is the biggest challenge for every student. “We still do physical exercise every day like free-hand exercises and weightlifting and only after that we practice wrestling in the akhara,” says Sonkar. He further adds, “The flexibility and fitness that one acquires from a session at the akhara are extremely long lasting compared to a gym. You do not lose or gain weight after quitting kushti”. 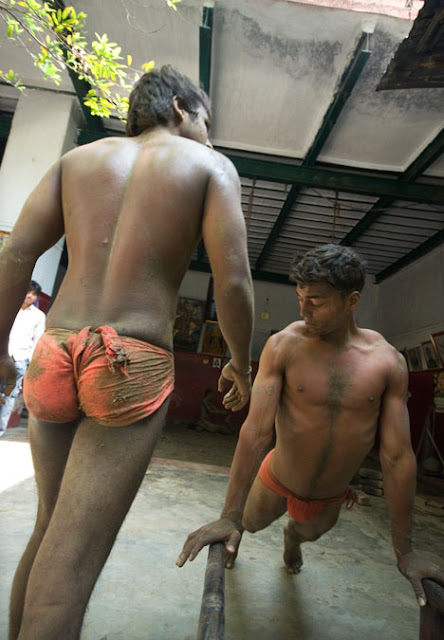 The levels of physical strength and fitness that can be achieved from kushti were visible when 27-year-old Vickey Pataniya started working out by swinging a couple of 20-kilo Gadas in two hands. A regular at the akhara for the last 10 years, Vicky with his robust chest and huge muscular body recalls, “I used to be very thin and weak in school, and students from senior classes used to bully me a lot. That was the reason I joined kushti at first, but as time passed I gained much physical strength and slowly fell in love with the art”. Another student of the ashram, 17-year-old Vijay Yadav, has just completed training and started learning techniques of wrestling.

Pahalwani is not only about bodybuilding or a muscular body to impress the opposite gender, but also about being equipped for self-defence. “The various techniques of kushti are specially created for fighting in the battlefield. Rajas and Maharajas used to learn these in their times,” says Suresh Yadav. Techniques like Dhak, Nikas, Dhobi Pachad or Kanpheri are specially designed to defeat the opponent in freehand combat. “Like Kanpheri, which happens to be Pal Babu’s speciality, is about pulling the opponent by holding his neck, while he automatically pulls himself back, and then giving him a sudden push that he falls on his back,” says Pal Babu by rubbing his face with the specially made clay of the akhara. 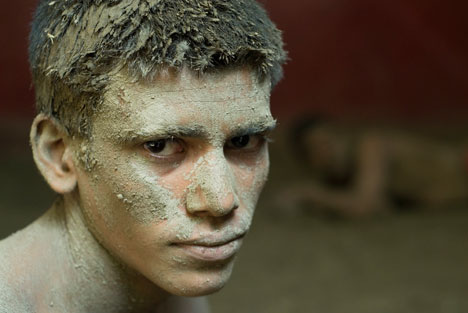 “The clay is made by mixing various ingredients like sandal dust, Multani Mitti (Fuller’s Earth), Neem leaf, Mustard oil, various flower petals and clay from the Ganges. These help to fight back various skin diseases,” says Pal Babu. “You see, Pahalwani is not only for physical health but for mental health as well. It needs strong will power and an attitude to give up many worldly pleasures; for that a Pahalwan should avoid the company of a woman, and that is the only way to learn the core of Pahalwani and Sanskriti (culture),” adds Pal Babu.

When asked about the sanskriti, Manoj Sonkar points towards an old man, clad in a red dhoti, sweeping the ashram premises with the utmost concentration. “His name is Dhonilal Sonkar and he is 75-years- old. He has achieved everything in his life a common man can dream of, yet he comes here every day to sweep the floor. It is not his devotion to God but a habit of many years that drives him to perform this chore. It has become a part of his culture that tells him that sweeping the floor is his duty. He has been doing this for years ever since he started practice in the akhara. The culture of Pahalwani taught him the virtues of hard work and devotion”.