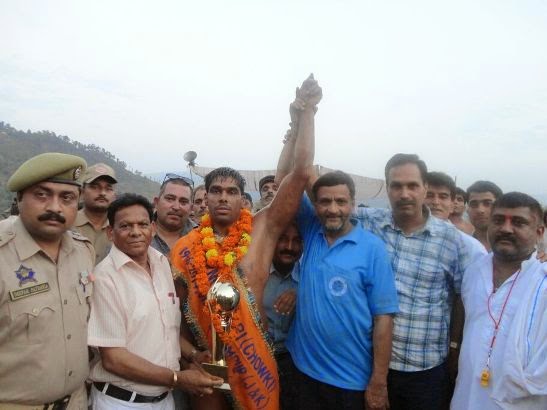 Birnu Kesari Vishal Dangal was organized by Birnu Dangal Committee in collaboration with J&K Indian Style Wrestling Association was held at Birnu (Chowki) in Tehsil Ramnagar of District Udhampur. 60 bouts were played in the one day Vishal Dangal. Wrestlers from Delhi , U.P Punjab, Harayana and J&K participated.
The first main bout was between Wrestler Sandeep of Mehar Singh Akhara Rohtak in Haryana and Wrestler Arvind of Banaras. This bout was won by wrestler Sandeep which lasted for 23 minutes. Winner Sandeep was awarded with cash prize of Rs 9,000/- along with Traditional Patta and momento by chief guest Prof. Sukha Chand and Shiv Kumar Sharma President J&K Indian Style Wrestling Association. The runner-up Wrestler Arvind got Rs 7,000/.
2nd main bout was won by Wrestler Kamaljote of Khanna in Punjab by defeating Wrestler Ajay Sharma of Landen Power house Udhampur. Winner Wrestler was awarded with cash prize of Rs. 6,000/- while runner-up Wrestler Ajay got Rs. 5,000/- 3rd main bout was won by Wrestler Vijay of Bai- Bajalta in Jammu who defeated wrestler Alam of Meerut in U.P. 4th bout was won by Samsher Singh of Meerut who defeated Ali of Ramnagar.
District Udhampur BSP President Prof. Sukhnam Chand was the chief guest on the occasion who gave away cash prizes to the winners and runner-up Wrestler. Sarpanches, prominent persons a large number of locals witnessed the dangal.