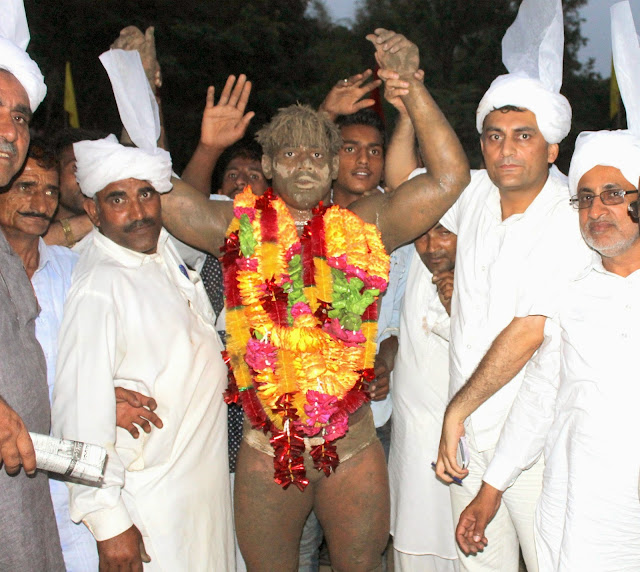 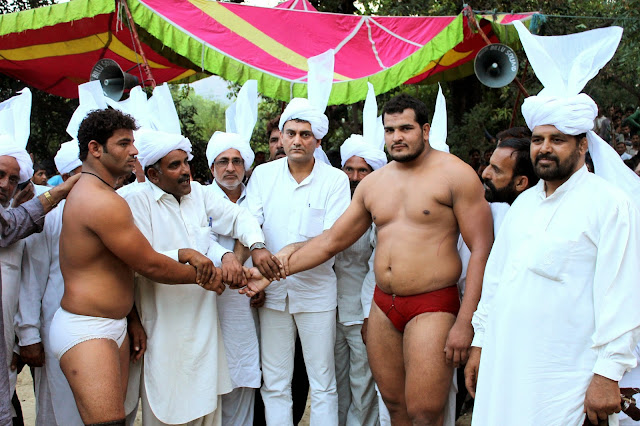 JAMMU: In a tough fight which lasted for 30 minutes Wrestler Abdul Ghani of Maler Kotla clinched the Bambyal Kesri title which was held at Bambyal fallen on the old traditional route of Maa Vaishno Devi ji defeating Pardeep of Patiala. The Dangal was organized by Bambyal Dangal Committee under the overall supervision of its Chairman Ram Singh, Vice Chairman Choudhary Bashir Ahmed, & Secretary Choudhary Manzoor Ahmed in which more than 45 bouts were played.

Winner and runner –up wrestlers were awarded with cash prize of Rs.31000/- and Rs.20,000/- respectively by the Chief Guest of the occasion Rakesh Wazir State Gen.Secretary Bahujan Samaj Party in presence of Sr.PDP leader Showkat Choudhary.

In the second main bout Zakir of Bisnah defeated Sanjeev Singh of Delhi. The 3rd bout was tied between Vikas of Khanna & Farooq of Bishnah. The 4th bout was won by Lallu of Garh Shankar by defeating Bobi of Bishnah. The 5th bout ended up in a draw between Babba of Kot Bhalwal and Abdul of Maler Kotla,in another main bouts Nissar and Kalu bout ended up in a draw,Mohd.Asif beat Sukha,Akram beat Talib etc.

Mr.Rakesh Wazir Chief Guest of the occasion Complimented Dangal Committee for successful conduct of Dangal and said that holding of such events in the state sends a message of love, peace ,unity , and brotherhood to the entire country & state in particular and the youth who are taking wrong paths now a days get inspiration to do something positive and remain physically fit as well.He also assured them that he will takeup the matter of revival of old Heritage Route with Department of Tourism and get that started once again at the earliest.

Chairman Dangal Committee Ram Singh said that Rs.2.00 lac was spent on this dangal and thanked the people for making this Dangal a grand success .Others who were present on the occasion include BSP assembly president Nagrota Gardhari Lal,Ex.Dy.SP Ghulam Rasool, Rehmat Ali,Saraj Din,Shyam Lal,Noor Mohd., all serpanches and Naib Serpanch Bagh Hussain etc.