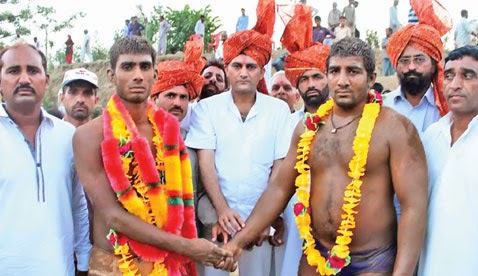 JAMMU: In a tough fight which lasted for 30 minutes Wrestler Lallu of Bajrangi Akhara and Baba of Kot Bhalwal shared the Showa Mathwar Kesri title which was held at Showa, four kms from the famous religious spot of Jammu i.e. Mathwar.
The Dangal was organised by Showa Dangal Committee under the overall supervision of its President Mool Raj and Sarpanch Mumtaz Ahmed in which more than 45 bouts were played.
Bahujan Samaj Party State General Secretary, Rakesh Wazir was the Chief Guest who gave away cash prize to the winners of the first bout Baba and Lallu.
In the second main bout Amir Khan of Nargara defeated Vijay of Bain Bajalta. The third bout was won by Naresh of Showa by defeating Baj Singh of Ban Batara. The fourth bout was won by Javed Khan of Nargara by defeating Anil of Pargwal and the fifth bout ended up in a draw between Swarn Singh of J and K and Rajat of Delhi. The sixth bout was won by Rajat of Delhi by defeating Balwan of Dayaran etc.
Showa Dangal Committee members and Technical officials who helped for conduct of wrestling event were President Mool Raj, Serpanch Showa Mumtaz Ahmed, Lamberdar Dwarka Nath, Allah Mahi, Master Ram Dayal, Shiv Kumar, Suraj Mani, Govind Ram, Dr.Ravi, Master Mangat Ram and Pandit Des Raj.
Rakesh Wazir complimented Dangal Committee for successful conduct of Dangal and said that holding of such events in the State sends a message of love, peace, unity and brotherhood to the entire country and State in particular.
On the occasion Lambardar Dwarka Nath was honoured for giving 5 kanal land to the Middle School Showa free of cost.
President Dangal Committee Mool Raj thanked the people for making the Dangal a grand success.
Others who were present on the occasion include BSP Assembly President Nagrota Gardhari Lal, Ex-Sarpanch Showa Bagh Hussain, Ex. State Gujjar Advisory Board Member Bagh Hussain, Ganesh Dass, Prem Nath Bhagat and Raj Paul Singh.